If you, dear Reader, are a Republican American, and you are demographically “middle class”, and you support the Tea Party movement, you are likely to have been seriously deceived – by Big Energy. Or Big Mining.

END_OF_DOCUMENT_TOKEN_TO_BE_REPLACED 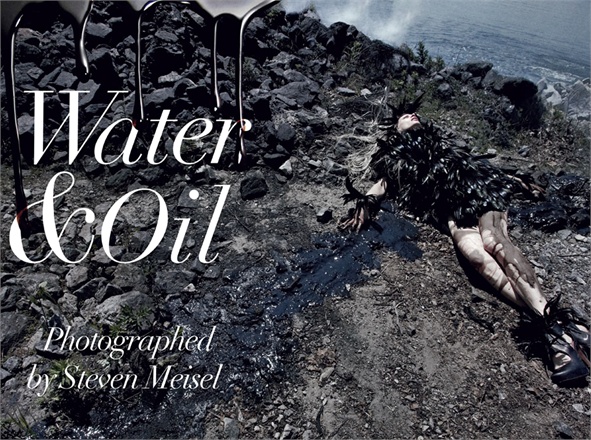 Advertising imitating Life…but just which photograph is the fashion shoot ?

Despite the best early morning wide-eyed televised efforts of Carol Browner this week, the BP Gulf of Mexico Oil Spill story just will not die :-

“Gulf oil spill: White House accused of spinning report : Scientists say it is ‘just not true’ that the vast majority of oil from the BP spill has gone : Suzanne Goldenberg, US environment correspondent, guardian.co.uk, Thursday 5 August 2010”

Use all the dispersants you want (or are just about legally entitled to), but an ecological catastrophe like this will not go away and die quietly, even though a large number of marine animals will be forced to :-

“…to use dispersants…doesn’t make the oil go away, it just puts it from one part of the ecosystem to another…”

END_OF_DOCUMENT_TOKEN_TO_BE_REPLACED

Carol Browner, Director of the White House Office of Energy and Climate Change Policy in the United States of America, has been all over the Media, announcing the policy to “kill kill kill this” BP nightmare story, telling the world that a turning milestone point has been reached :-

Have they decided that BP have been punished enough now for the Gulf of Mexico oil gusher, and the reputation of the company needs to be rehabilitated sharply in order to protect the Economy ?

I made the mistake of taking in a BBC TV news bulletin on the matter. I heard several talking heads say it’s “good news” that roughly three quarters of the accountable oil from the spill has “disappeared” :-

Breaking this story is “good news” for the stability of pension funds, maybe. But what is the real extent of the real damage to the real world, the world of oceans and fish and plankton ? Will the world be watching as the researchers scavenge data and clues to the marine ecotastrophe that is still unfolding ?

END_OF_DOCUMENT_TOKEN_TO_BE_REPLACED

Here’s a plan to save BP CEO Tony Hayward’s job.

Why not bring in a special new executive at BP’s London Headquarters, maybe ex-CEO of BP, Lord John Browne of Madingley, who was rather green, really, or that other Anthony, the ex-Prime Minister Tony Blair, and make them responsible for expanding an entirely new share offering in Solar Power.

Investors would be encouraged to explicitly finance new solar projects around the world by buying “solar shares” in the company, who make a priority of environmental matters, as we all know.

The British Government could offer extensive tax breaks, declining to tax revenues from solar electricity in the same way that BPs’ Oil and Gas sales are tapped for a percentage slice to help the public purse.

And there you could have it, bish bash bosh.

And while you’re at it, rename the company “Beautiful Photonenergy”.

The world could forget about the Gulf of Mexico plumes and seepages and we could all, together, forge a clean, smooth new Low Carbon, Low Dirt world.

Seems like BP America’s favourite unconventional fossil fuel is out of control.

The ever-vigilant and fair Rowena Mason at the Daily Telegraph dives deep into the Shale Gas (Gas Shale) story with a piece featuring a trailer for the new Gasland film :-

“Shale gas pollution fears leave Americans with another energy headache : By Rowena Mason Energy Last updated: June 23rd, 2010 : Still politically scorched from BP’s giant Gulf of Mexico spill, it couldn’t be a worse time for America’s oil giants to find themselves roasting in another environmental firestorm. But new flames of controversy are on the horizon – in fact, literally emanating from the drinking water of US citizens living near so-called “shale gas” fields. A controversial documentary, Gaslands, which was aired on television channel HBO this week, shows one Colorado homeowner bending over his tap, holding a lighter with outstretched arm and igniting his chemical-laden water…”

END_OF_DOCUMENT_TOKEN_TO_BE_REPLACED

Tough on grime; tough on the causes of grime.

American President Barack Obama declares that as regards environmental pollution, “we shall fight them on the beaches”.

“Already, this oil spill is the worst environmental disaster America has ever faced. And unlike an earthquake or a hurricane, it’s not a single event that does its damage in a matter of minutes or days. The millions of gallons of oil that have spilled into the Gulf of Mexico are more like an epidemic, one that we will be fighting for months and even years.”

“But make no mistake: We will fight this spill with everything we’ve got for as long as it takes. We will make BP pay for the damage their company has caused. And we will do whatever’s necessary to help the Gulf Coast and its people recover from this tragedy.”

END_OF_DOCUMENT_TOKEN_TO_BE_REPLACED

Phew ! That’s a relief ! The American President Barack Obama has personally spoken to British Prime Minister David Cameron apparently to reassure him he meant no harm to the reputation of Britain by blaming BP for the Gulf of Mexico oil spill :-

I should hope not ! BP stopped being “British” Petroleum some time ago. Forty percent of BP’s business is in the United States :-