Back in the 1970s they were expecting global cooling – of the economy. There were oil shocks and shocking prices, and petrochemists beavered away, sweating over test tubes the size of football fields, whisking up synthetic fuels.

It was not the first time that the world had tried to synthesise liquid vehicle fuel. Hitler famously did it during the Second World War, and had it not been for Bergius and Fischer-Tropsch, Nazi Germany would have collapsed much sooner under the anvil of global economic sanctions. I mean, the history books insist the multi-pronged military assault was responsible for the Victory in Europe, but the final push would never have succeeded without the suspension of energy trade.

Various syngas and synfuel projects have continued in various places, mostly America, and although the first plants used coal and Natural Gas to make other things, these days the emphasis is on biomass.

We can expect to see a dramatic rise in the amount of Biogas and Bio-syngas produced over the next few decades, along with renewably-sourced hydrogen. It will all get fed into the global syngas refineries, and out will pop power, vehicle fuel and chemistry.

END_OF_DOCUMENT_TOKEN_TO_BE_REPLACED

It is a newer, clearer tone that George Monbiot uses in his piece “The nuclear industry stinks. But that is not a reason to ditch nuclear power“. He seems to have lost his dirty annoyance with filthy anti-nuclear activists and moved onto a higher plane of moral certitude, where the air is cleaner and more refined.

He is pro-technology, but anti-industry. For him, the privately owned enterprises of atomic energy are the central problem that has led to accidents both of a radioactive and an accountancy nature. “Corporate power ?”, he asks, “No thanks.” The trouble is, you can’t really separate the failings of nuclear power from the failings of human power. It’s such a large, complex and dangerous enterprise that inevitably, human power systems compromise the use of the technology, regardless of whether they are publicly or privately owned. For a small amount of evidence, just look at the history of publicly-managed nuclear power in the United Kingdom. Not exactly peachy. And as for those who claimed that a “free” market approach to managing nuclear power would improve matters – how wrong they were. In my view, on the basis of the evidence so far, nobody can claim that nuclear power can be run as an efficient, safe, profit-making venture.

END_OF_DOCUMENT_TOKEN_TO_BE_REPLACED

Question 1    Do you follow stories in the media about energy prices ?

Question 2    Do you think that we may have to get used to higher energy prices ?

Question 3    Would you be happy to pay more for energy ?

Question 4    Will you make plans to change the way you use energy in response to any price changes ?

Question 5    Do you think that energy can be kept affordable ?

Background Information : please give a few brief details about what kind of person you are, to help us check that a representative sample of people have answered the survey.

As you are, I’m sure, aware, context is everything.

I was so sure we’d escaped the clutches of the “Thorium Activist Trolls” a few years ago, but no, here they are in resurgence again, and this time they’ve sucked in George Monbiot, Mark Lynas and Stephen Tinsdale, all apparently gullible enough to believe the newly resurrected Generation IV hype campaign.

I was, I admit, quite encouraged by both the Hemp and Biodiesel drives, until I realised they were a deliberate distraction from the Big Picture – how to cope with the necessity of creating an integrated system of truly sustainable energy for the future.

Hemp and Biodiesel became Internet virally transmitted memes around the same time as the Thorium concept, but where did they come from ?

Where does the Thorium meme originate from this time round ? I found some people took to it at The Register, where they spin against Climate Change science a lot – watch the clipped video :-

I would suggest that there are connections between the Thorium campaign and the anti-Climate Change science campaign, and I have some evidence, but I’m too busy to research more in-depth just now, so I’m not going to write it all up yet.

The key issues with all energy options is TIME TO DELIVERY and SCALEABILITY, and I think the option presented by the Thorium fuel cycle fails on both counts.

Yeah, sure, some rich people can devote their life savings to it, and some Departments of Defense (yes, Americans) and their corporate hangers-on can try selling ANOTHER dud technology to China (which is the basis of some Internet energy memes in my view).

Remember Carbon Capture and Storage ? The British Government were very keen on making a Big Thing about CCS – in order to sell it to the miscreant Chinese because (WARNING : CHINA MYTH) China builds 2 !! coal-fired !! power stations a week/day/month !!

THORIUM – A Brief Analysis
TIME TO DELIVERY – 20 to 50 years
SCALEABILITY – unknown
USEFULNESS ASSESSMENT – virtually zero, although it could keep some people on the gravy train, and suck in some Chinese dough

The Tyndall Centre say that global emissions of greenhouse gases have to peak AT THE LATEST by 2020. We should be thinking about rolling out the technology WE ALREADY HAVE to meet that end.

PS What other evidence do we have that the Thorium meme is most likely just a propaganda campaign ? Nick Griffin of the British National Party backs it, and the BNP are widely alleged to promote divisiveness… 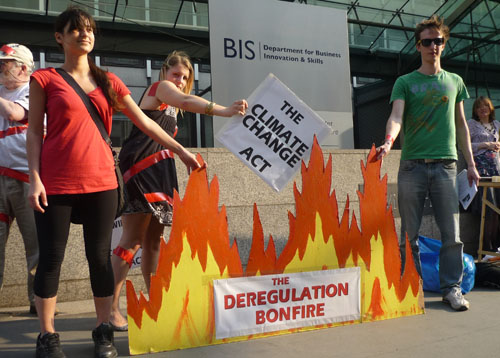 I receive another letter from Iain Duncan Smith MP on vellum yellow with sickly pale green type. “Dear Mrs [sic] Abbess”, the letter reads, “Further to our previous correspondence regarding Stop Climate Chaos Big [sic] campaign, please find enclosed a reply from Chris Huhne, the Energy Secretary.” I asked Iain Duncan Smith in person for his own and personal support for a strong Energy Bill. What did he do ? Pass my letter on to the Department of Energy and Climate Change (DECC). I would have prefered a personal commitment to the issue, but, sadly, it was not to be.

The Rt Hon continued, “I hope you find his letter reassuring…” Reassuring ? What ? Am I some kind of emotionally incontinent complainant ? “…and helpful. However, please don’t hesitate to contact me again if I can be of further assistance.”