from: Jo Abbess
to: Andrew Pendleton

…I don’t like being told that carbon should be priced to solve climate change, because I simply don’t think it will work. All attempts so far haven’t worked, and for one very simple reason – nobody wants to be forced to buy a negative, virtual commodity.

What’s the name of your Harvard economist again ?

END_OF_DOCUMENT_TOKEN_TO_BE_REPLACED

Question 1    How frequently do you hear information about energy being wasted at home and in offices and public buildings ?

Question 2    Do you think that energy conservation will help with meeting carbon emissions targets ?

Question 3    Do you think that insulation, draught exclusion and efficient machines are desirable ways to save energy ?

Question 4    Have you or will you take energy conservation measures at home, such as adding roof insulation ?

Question 5    Do you think that energy conservation services can make a profit for energy companies ?

Background Information : please give a few brief details about what kind of person you are, to help us check that a representative sample of people have answered the survey.

While everybody’s busy discussing ethics in the media, today’s been a great day to bury bad news – the shelving of the Energy Bill – and with it the Green Deal, the only hope Britain had left of economic recovery in the short-term.

And what of the Electricity Market Reform white paper and the National Policy Statements on energy ? Into the round wastepaper-bin-shaped recycling receptacle, possibly.

I don’t know whether I should make overt political statements, but I think this news sugar ices the brioche, so I will : David Cameron’s “greenest government ever” has failed.

It is a newer, clearer tone that George Monbiot uses in his piece “The nuclear industry stinks. But that is not a reason to ditch nuclear power“. He seems to have lost his dirty annoyance with filthy anti-nuclear activists and moved onto a higher plane of moral certitude, where the air is cleaner and more refined.

He is pro-technology, but anti-industry. For him, the privately owned enterprises of atomic energy are the central problem that has led to accidents both of a radioactive and an accountancy nature. “Corporate power ?”, he asks, “No thanks.” The trouble is, you can’t really separate the failings of nuclear power from the failings of human power. It’s such a large, complex and dangerous enterprise that inevitably, human power systems compromise the use of the technology, regardless of whether they are publicly or privately owned. For a small amount of evidence, just look at the history of publicly-managed nuclear power in the United Kingdom. Not exactly peachy. And as for those who claimed that a “free” market approach to managing nuclear power would improve matters – how wrong they were. In my view, on the basis of the evidence so far, nobody can claim that nuclear power can be run as an efficient, safe, profit-making venture.

END_OF_DOCUMENT_TOKEN_TO_BE_REPLACED

The production and supply of electricity can be very wasteful. In industrialised countries, electricity generation is usually done on a “centralised” model, using large power plants, often remote from urban populations.

The inefficiencies in this kind of network are such that it matters where new power stations are sited. For example, in the UK, because of the unequal grid load between Scotland and England, it is more efficient to put a new power station on the South Coast, rather than North of the Border :-

Developing new Renewable Energy technologies could actually increase the efficiency of the electricity grid – because they could be sited more locally to where electricity is used :-

https://srren.ipcc-wg3.de/report/IPCC_SRREN_Ch08
“As [solar photovoltaics] PVs are installed predominantly locally, there is the possibility of reducing grid losses to the extent that the production coincides with demand (Wenger et al., 1994; Chowdhury and Sawab, 1996).”

Also, crucially, because they can bypass having to feed the main high voltage power grid, they can avoid losses from low-to-high and high-to-low voltage transformation. In which case, you don’t need heaps of new pylons ! Oh, let’s have a diagram :- 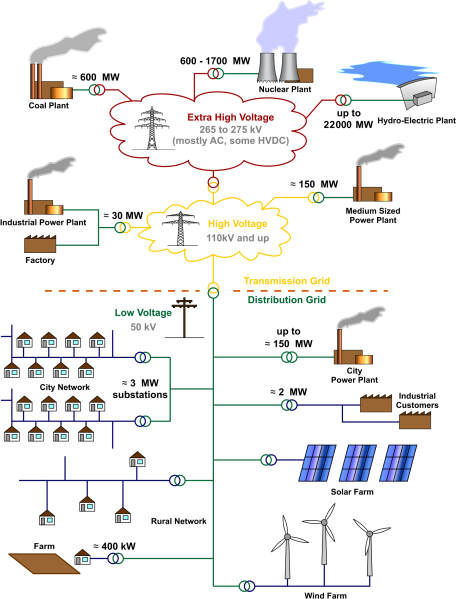 https://srren.ipcc-wg3.de/report/IPCC_SRREN_Ch08
“In some locations, adding solar PV to the system near demand centres may avoid the need to expand the transmission network. Kahn et al. (2008) illustrates a case in California where adding PV near coastal load centres would negate the need for significant transmission investments when compared with other renewable sources, in particular the transmission built to access solar PV, CSP, and geothermal in the desert”

Not only can new local power plants reduce the loss of power from the grid and rationalise demand; because they are new, they are likely to be more efficient than the old, remote power plants we currently have.

It’s unlikely that people would accept new nuclear power stations close to home, nor traditional thermal coal combustion plants, but there are still a number of acceptable technologies for new local power stations. Besides the no-noise, no-waste solutions such as slowly rotating wind turbines and solar photovoltaics, there are also new efficient biomass solutions.

The golden rule about combustion technologies is – the cleaner the fuel going in, the safer the flue gases coming out – which is why gasification to pre-treat mixed wastes before combustion is likely to be a favourite for urban biomass plants. Too many people have rightly complained about plain vanilla “incineration” plants. With gasification, it is possible to trap contaminants and stop them from flying into the sky :-

https://cgpl.iisc.ernet.in/site/FAQ/MostFrequentlyDiscussedIssues/CombustionvsGasification/tabid/163/Default.aspx
“…In doing all these, the emissions – (a) gaseous – NOx, CO, HC, and SOx can be shown to meet international norms, (b) liquid effluents – can be treated by water treatment processes that are standard and the disposal of the sludge meeting international norms and (c) solid residues – like ash and char used for landfill after further treatment that would be not be necessary in most cases [except when one uses old wood (altholz)]… it is Clean Biomass Technology.”

There has been a lot of discussion about Combined Heat and Power (CHP), which makes better use of the energy that’s input to the plant by using the heat that would normally have been sent up a cooling stack chimney. The heat is delivered locally, with District Heating pipe grids. The main problem with deploying CHP/DH is that nobody is quite clear where money would come from to fund this kind of development, especially since CHP would probably have to be managed, and possibly owned and invested in, by local authorities, such as town councils, whose budgets are not always bulging. And then there’s the cost of digging the ground to lay the district heating pipe network.

Micro Combined Heat and Power – basically CHP stations you can run in your kitchen – are currently still being trialled and developed, but they are likely to be too expensive for most household budgets :-

https://srren.ipcc-wg3.de/report/IPCC_SRREN_Ch08
“The commercialization of highly efficient, small-scale fuel-cell-based CHP systems (with 80 to 90% overall efficiency) could contribute to a more energy efficient and cost effective use of existing and new gas grids in the longer term (DeValve and Olsommer, 2006; Zabalza et al., 2007).”

To improved the efficiency of the main spine of the centralised electricity supply grid, having more efficient power plants is a definite bonus. As the Large Combustion Plant Directive (LCPD) of the European Commission shuts down old coal-powered stations, companies see the economic sense in building new highly efficient technologies, some of the best advances coming from Combined Cycle Gas Turbine (CCGT) technology, burning Natural Gas.

They can also be built quickly, relative to options like new coal or new nuclear power plants, and can be more flexible in operation, which can contribute towards grid energy efficiency.

As another benefit, burning Natural Gas, Biogas (from digestion of Biomass) and Bioyngas (from gasification of Biomass) produces much less carbon dioxide than burning coal in the full lifecycle analysis (although there are questions still hanging over the total greenhouse gas impact of some Biomass supply chains).

Creating Syngas from Biomass to be used for electricity generation means that a range of Biomass feedstocks can be drawn into the supply line. Plus, making Syngas from Biomass reduces the energy demand of tranporting the energy from the source of the Biomass to the power plant – it’s virtually fuel-free to feed gas down a pipe – but it takes convoys of trucks to transport wood.

Building new efficient central power stations will have a real impact. Here’s an example of why – power consumption, as part of overall energy consumption in the United States is projected to rise by small percentages between now and 2030 – so demand will remain firm, and not highly variable – so swapping out coal plants for gas plants will really change things :-

At the level of the major transmission network, High Voltage Direct Current (HVDC) cables have been proposed for parts of the new infrastructure being planned, which should improve efficiency, and there are plans for a better grid, with “smart” systems in play to load balance and manage demand, including having take-back contracts with large businesses running non-critical power applications.

Any Natural Gas that doesn’t need to be burned in power stations can be diverted to the gas grid, where it can be burned with 85% or higher efficiency to produce heat at home. The systems of electricity production and use would be made more efficient and for the UK this would also mean lower import levels of both Natural Gas and electricity.

There is waste at the end user end of the electricity network too – partly due to poor infrastructure choices. The use of electricity as power for lighting, heating and cooling at public and business buildings, such as hospitals, schools, colleges, town halls, and offices is of concern, as there are often problems arising from architectural design and work space layout, and frequently not sufficient monitoring from facilities managers. Simple things can still change the situation – such as substituting lighting with low power LED options, and organising cooperatively in offices for the best ventilation and heating arrangements for all working there. Democracy can mean power savings. Democracy can mean power.

The problem is also partly due to the hyper-consumption of electrical and electronic goods – although in Europe, legislation in the form of a range of Directives are moving on this issue – regulating for greater efficiency and less waste in and from manufactured products.

Heat pumps could also be a more efficient option than current electrical heating and cooling systems.

It is important to address electricity waste issues with a variety of low carbon means. In the UK, a “generation gap” is still a possibility :-

The drive for energy efficiency is not anti-growth. In the short term an efficiency drive stimulates the economy to new investment. In the longer term, it provides a greater energy resource at lower cost and with lower emissions.