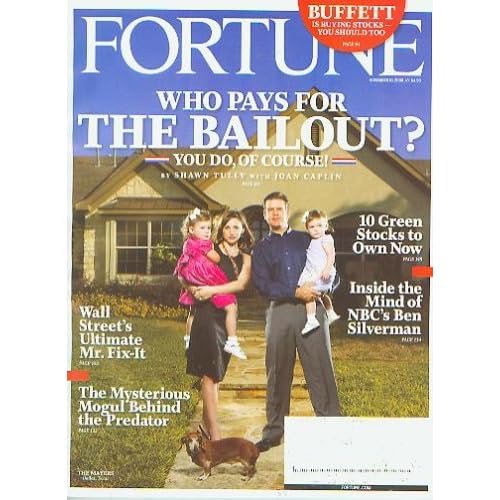 Browsing at a newsagent on a mainline railway station…

The question on the front cover of Fortune magazine, Europe edition Number 20, November 2008, already on the stands is “Who Pays for The Bailout ? You do, of course”. Of course, as this Credit Crunch means Bailout argument plays out, the issue of Energy and Climate Change is lost. But the question should be all about how to create a new green economy. Who pays for the re-powering ?

A sign of the greening times – another story teaser on the Fortune magazine advises “10 Green Stocks to Own Now”, and the front of the Independent on Sunday quotes Obama claiming that Energy is his “number one priority” in his bid for presidential election, with his “Apollo” project :-

“Obama’s green jobs revolution : Democrat will lead effort to curb world’s dependence on oil; Plans to create five million new posts in clean energy projects : By Geoffrey Lean in San Francisco and Leonard Doyle in Washington : Sunday, 2 November 2008 : Obama has pledged to create five million new ‘green collar jobs’ if elected : Barack Obama is promising a $150 billion “Apollo project” to bring jobs and energy security to the US through a new alternative energy economy, if his final push for votes brings victory in the presidential election on Tuesday. “That’s going to be my number one priority when I get into office,” Mr Obama has said of his “green recovery” plans. Making his arguments in a radio address yesterday, the Democratic favourite promised: “If you give me your vote on Tuesday, we won’t just win this election. Together, we will change this country and change the world.”…”

Meanwhile…Gordon Brown and Ed Miliband (and Peter Mandelson) get off the plane in Saudi and beg for investment into green energy in the UK :-

“Gulf petrodollars help UK go green : Brown calls for Saudis to give more cash to IMF : Gaby Hinsliff, political editor : The Observer, Sunday 2 November 2008 : The fight against climate change will get an unexpected boost today from oil-rich Gulf states which will pledge to invest some of their petrodollar profits in British green energy projects. The surging oil price over the past year has left parts of the Middle East awash with cash as the rest of the world is squeezed by the credit crunch, making Arab royals some of the few active investors worldwide. The Gulf states have enjoyed a $1.4 trillion windfall from higher oil prices since 2003. Ed Miliband, the Climate Change Secretary, arrived in Saudi Arabia yesterday with Gordon Brown at the start of a tour of the region. He said some of that cash would now ‘help our firms reap the rewards from going low carbon and providing green energy to thousands of families’ under a so-called ‘green Gulf deal’ to be announced today…”

But that’s not the real reason why they are there. Ostensibly, the delegation’s serious business is about asking Saudi and other Arab oil states to contribute more towards the International Monetary Fund :-

“Gordon Brown in the Middle East : Brown hopeful of Saudi cash for IMF : Allegra Stratton in Riyadh, guardian.co.uk, Sunday 2 November 2008 15.30 GMT : Gordon Brown said today he was hopeful of success in his attempts to persuade dollar-rich Gulf states to prop up ailing national economies through a massive injection of capital into the International Monetary Fund (IMF). The prime minister spent three hours in one-to-one talks with Saudi Arabia’s King Abdullah, trying to persuade the monarch to invest in a revamped IMF. On the first leg of a four-day visit to the Middle East, and aiming to secure hundreds of billions of dollars for the fund, Brown called off a planned dinner with business leaders accompanying him so as to allow maximum negotiating time with the Saudi king. The IMF currently has around $250 billion in its emergency reserves but there are fears that, with Hungary, Iceland and Ukraine having already sought assistance and more nations expected to follow, the sum might not be sufficient. Brown hopes to persuade Gulf leaders to use some of the estimated $1 trillion they have made from high oil prices in the last few years to boost the reserves, indicating that he would like to see the current sum increased by “hundreds of billions” of dollars. The prime minister said following the talks that he was hopeful of having secured Saudi backing…”

“…Brown, who is accompanied by a high-level trade delegation seeking Gulf investment, including the CEOs of BP and Shell…”

What on earth are BP (formerly British Petroleum) and (Royal Dutch) Shell doing in a delegation to the Arab states begging for the IMF charity fund and green energy investment ? Is it that BP and Shell won’t pay for green energy and it’s too hard to ask the British people to pay extra tax, so they’re coming to the Arab countries for a green energy bail-in ? What is going on here ? If OPEC countries are all in the “Axis of Evil”, and no foreign oil and gas companies can get a toehold, why are BP and Shell in the government delegation to Saudi ?

Paying for new energy systems can be expensive. The European Union Emisssions Trading Scheme is saying they want 100% of carbon emissions auctioned by 2013 to pay for larger projects – Carbon Capture and Storage and new Nuclear Power. However, the costly deadweight “white elephant in the room” is not nuclear power, but dead wells.

Are they all talking about Peak Oil in the OPEC Gulf, and proposing business opportunities to the King of the House of Saud to offset the Middle East’s future total loss of business as the wells empty – offering them compensation in the form of green investment deals ? Asking the Saudis to join the green energy race now and get ahead ?

BP and Shell have benefited from the recent rise in the price of oil, profiting even as the oil price has hit millions and created impoverishment. But they’re going to have to spend a very large amount on exploration for new oil and gas from now on. So why is there still resistance to spending more on renewables ? Can BP and Shell ever be convinced to go green ? Would a barrel load of toxic news work ? No. BP and Shell can’t pay for green energy because they have to maintain the profits of their shareholders. Pensions are going to be bad enough without forcing major “British” oil companies to pay for such things as bioethanol, algae biodiesel, solar panels and wind farms.

Action to tackle climate change must be a “tight shadow” on Peak Oil and its fall – tighter than the 9.1% depletion of the largest wells projected by the International Energy Agency (IEA) To reverse the oil decline, and more so to take action on climate change, investment is required. Banks are becoming owned by oil-rich nations, but this is simply a natural outcome of poor financial regulation that led to the Credit Crunch. However, it doesn’t mean that the future will be oil and gas necessarily. This new layer of ownership of financial bodies is not significant, as it will not seriously impact the greening of energy, if people are serious about it.

What is of value here is not banking but energy itself, which underpins the entire economy. The scenario is this : Saudi Arabia will not admit in public that it’s going down because of “Peak Oil”. They would prefer to keep up the revenue, but they’re not “engineering” a reduction of supply. It’s reducing anyway.

From their perspective, allowing supplies to weaken, by not doing any new investment into raising production, would be protecting their reserves to sell in future. A good strategy – even more so as prices rise against losses of supply but strong demand (even despite the blooming recession).

I figure that what BP and Shell are doing in the Middle East is making the case to the major oil-producing states to keep on pumping.

I guess that what Gordon Brown is doing is making the Saudis an offer they can’t refuse – either the major western states will implement measures to control oil prices which would make OPEC lose revenue, or the Saudis can underwrite the global bailout.

This mission is not about green energy investment. It’s about keeping the oil flowing.