Who could have guessed that my previous post would not be the final word on “The Population Question” ?

As anybody who has ever looked at this question and its surrounding myths will know, there is layer upon layer of mis-fact, swirl around swirl of supposition and conjecture on the topic of human-to-land density in the imaginings of the newspaper-reading populace.

Taking the position that I do on this subject puts me distinctly at odds with such luminaries as David Attenborough, the animal kingdom representative :-

“David Attenborough is new Optimum Population Trust Patron : Posted on April 13, 2009…”behind every threat is the frightening explosion in human numbers.”…”

It also makes me an opponent of the ideas of Jonathan Porritt, former chair of the Sustainable Development Commission (which in future will not be financially sustained by the recently-elected Coalition United Kingdom Government) :-

But differ on the issue of human population and its growth from these major league gentlemen I must.

First, the rate of increase of human population is reducing :-

This means that human population is inevitably going to “tail over”, reaching a plateau in the near future :-

Although some people were putting around the scare story a few years ago that the world’s human population would rise to an astonishing 16 billion (or thereabouts), this is extremely unlikely to happen :- 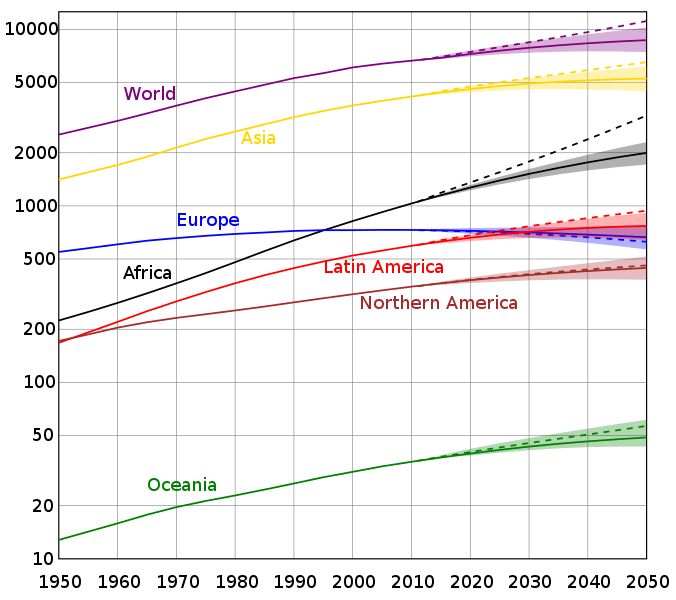 And then we have to consider Climate Change.

As the graphic at the top of this post shows, the major growth in human population in the next few decades will be in the areas of the world that have Very Low Carbon Emissions. Many of these are Least Developed Countries, or early development nations, and have the least resources to be able to adapt to problems arising from changes in rainfall and drought :-

“Half of World Population Could Face Food Shortages by 2100: Another Dire Global Warming Effect : by Matthew McDermott, New York, NY on 01.12.09 : You only have to have had a cursory introduction to possible effects of global warming to have heard that rising temperatures are going to effect both water supply and crop yields. A new report indicates that by 2100 up to half of the world’s population could face food shortages, if we don’t actively work to adapt to rising temperatures. This is what the University of Washington’s David Battisti’s research discovered: Crop Yields Could Be Cut 20-40% by 2100 : Because of global rising temperatures crop yields in both mid and equatorial latitudes will be hindered. In the tropics higher minimum temperatures are likely to cut crop yields of maize and rice by 20-40% (not even taking into account the effect of temperatures on decreased soil moisture…). In higher latitudes, Battisti cited the heat waves in France in the summer of 2003 which cut wheat yields by 33% saying that by 2100 those sort of temperatures could be commonplace…”

Problems with crop harvests are already beginning to appear in the data, for example, in cereals :-

This will have an entirely predictable consequence for human population levels.

And even without considering food and freshwater stress, there’s the natural disasters to think about :-

This will, very naturally, have an impact on the rates of growth of human population. It’s hard to sustain communities and a way of life in the face of increasing extreme weather disaster, crop destruction, regularly ruined infrastructure, epidemics, freshwater resource corruption, and enforced seasonal or even permanent migration.

As a consequence, I believe we should treat projections of human population growth as continually subject to re-analysis.

And I think it is worse than contentious to suggest that regions of human population growth will be responsible for dangerous Climate Change.

I feel it is immoral to blame the poor, uneducated and under-resourced for the problems caused by high energy consumption.

The high energy users are the cause of Global Warming pollution.