Over the last ten years, I have attended many public meetings centred on the topic of Climate Change. In my experience, at any one event there will usually be (a) the town madhatter (well-loved, but completely batty), (b) a court jester (the only person in the room who finds the court jester witty) and (c) somebody who deliberately asks or poses what I call “the population question”.

The basic premise of this question is – since the world’s population is rising exponentially, we’re not going to be able to prevent Climate Change unless we force the people in Asia or Africa to stop procreating. Why, already, China’s Greenhouse Gas emissions are already larger than America’s ! And on the back of the diagnosis that the population explosion will ruin our chances of Climate stability, the logical conclusion is that it is pointless for people in the Western industrialised countries to reduce their energy and fuel use, as our emissions aren’t very significant compared to those of Asia.

I dread this question coming up, as most people don’t know where this question comes from or where it’s going or even why it’s raised. This argument has a very long pedigree, stemming back to opinions based on the (in)famous book “The Population Bomb” written by Paul Ehrlich, and its more recent revisitation “The Population Explosion” – works that have been generally misinterpreted in the common culture.

I have developed several great answers to this killer question. Whenever I hear something like, “you know, the real problem with environmental limits is the exponentially increasing human population. In places like China, India, Africa. It’s the largest problem, even more serious than Greenhouse Gas emissions in the developed countries. How are we going to feed people in future ?”, I respond with one of the following options :-

1. Environmental limits cause food production to fall, and naturally, this will have an impact in limiting population expansion. This is an ethical quandry that can only be resolved by rapidly advancing education and development goals. Education, particularly of women, slows human reproduction, and social and economic development assures families that they do not need to have larger families for economic reasons.

2. The real culprits in Global Warming are those whose Greenhouse Gases are the largest – that’s the Americans, Europeans, Japanese and Chinese, countries like that – all with slowing or limited growth in population. Where people have large families, they have very low emissions, so they’re not the problem – we are.

Blaming population growth amongst poor communities for Climate Change is a bit like blaming the Jews for the Holocaust, in my view. It’s immoral to deny the part that the rich play in emissions growth, whilst blaming the poor for Global Warming and food insecurity, which they are not responsible for.

This month I went to yet another public meeting where this same, old, tired and extremely weak argument was rolled out. Who is edcuating these people, I thought to myself ? Well, you can rule out the Media, for one thing, I mused. They’re proving incapable of doing any real research and effective communication.

I tried to give my best answer, but I only succeeded in triggering a bit of an incendiary incident, and getting a put-down from the facilitator of the meeting. That really is the end of my attending meetings with the general public involved, I thought to myself. People are completely uneducated, so open discussion is pointless. It’s a bit like trying to have a debate on immigration in a Public House – somebody who believes the Tabloid frenzy on “greedy asylum seekers grabbing benefits” and “stealing our jobs” is bound to jump in.

Here’s a slice of the facts on population – compare and contrast income plotted against human fertility for 1959 and 2009. Spot anything ? I think you will :-

And let’s cement this knowledge with a chart of global Carbon Dioxide emissions for the various regions since the Kyoto Protocol was signed :- 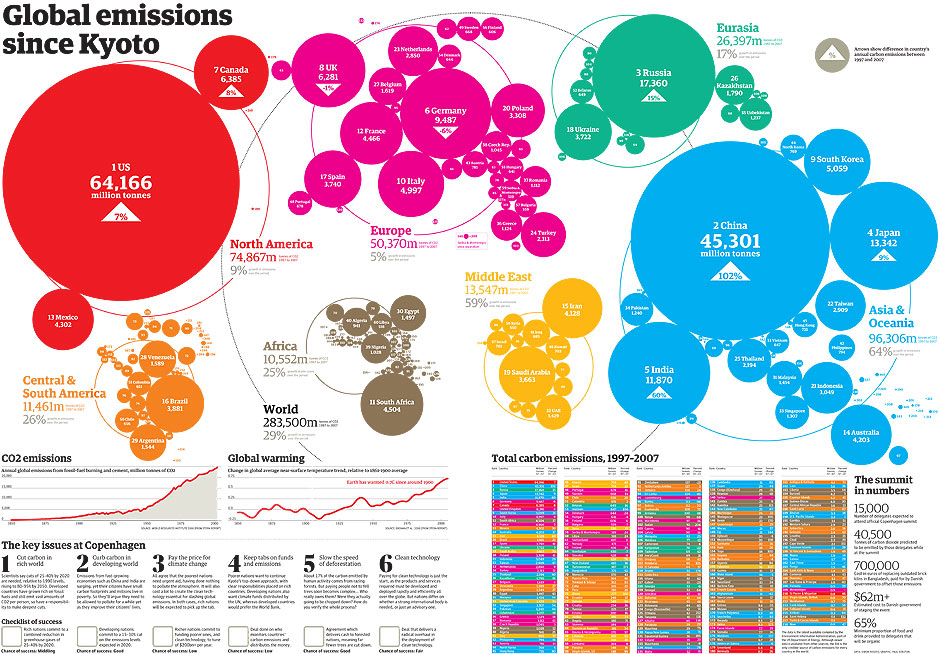 It’s only with these kind of facts at their fingertips that people can have a reasonable chat about world human population. Otherwise, it usually resorts to recrimination and bad feeling. I blame the people who deliberately bring this subject up, knowing how explosive the population question is.