So…the whole caravan comes to town, builds the rig, pipes in water, pumps in chemicals, filters off the gas, pipes out the poisoned water somewhere unquantified, and then packs everything up after a few months because there’s no more gas coming up, leaving the area looking like a moon crater :-

So how carbon-intensive is this kind of operation ? It’s a bit like chopping down Indonesian and Malaysian tropical rainforest to grow oil palm and then burning dirty bunker fuel to ship it all the way to Europe to make “cleaner burning” biodiesel. In fact, it could be worse than that – it could be dirtier than coal :-

And what’s all this business about chemical adulteration of groundwater ? That could be to do with the “hydraulic fracturing” process from horizontal drilling :- 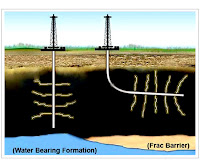 It’s true that the business needn’t resemble a travelling circus when there’s a large “play” of shale and horizontal drilling is used, but what about the possible side effects of chemical leakage into bodies of water and seismic activity, which doesn’t seem to get mentioned very often ? :-

There is some concern that shale gas is being promoted as a new “cure-all” for the energy industry, as gas is believed to be a cleaner source of fuel than coal, and gas shale is much, much cheaper than the proposed carbon capture projects and new nuclear power stations, which will only be developed with substantial tax breaks or subsidies or grants. (I mean, can you see a carbon price being set high enough to pay to make it worthwhile to fit Carbon Capture to every coal plant in the world ?) :-

“The recent ‘shale gas revolution’ in the United States has created huge uncertainties for international gas markets that are likely to inhibit investment in gas – both conventional and unconventional – and in many renewables. If the revolution continues in the US and extends to the rest of the world, energy consumers can anticipate a future dominated by cheap gas. However, if it falters and the current hype about shale gas proves an illusion, the world will face serious gas shortages in the medium term”

A Carbon Capture and Storage (CCS) fan wrote to me, linking to the CCS industry :-

“A British study indicates that cheap low-emission shale gas, with double the global reserves of conventional sources, will discourage investment in nuclear reactors and carbon storage. “In a world where there is the serious possibility of cheap, relatively clean gas, who will commit large sums of money to expensive pieces of equipment to lower carbon emissions?” Paul Stevens, senior research fellow at Chatham House, a London-based institute for the study of international affairs, wrote in the report published today.”

This is what the CCS fan had to add :-

“What this important article from the ‘CaptureReady’ international CCS news website fails to pick up (although other authors have) is that these prices will have an equal dampening effect on all renewables projects as well, […] never mind offshore wind power costs, while easily meeting all conceivable carbon dioxide reduction targets out to beyond 2050 and delivering reliable, dispatchable power, with none of the unreliability/unpredictability ‘down-sides’ of variable wind output. ‘I know which I’d pick’ as a power company today, especially given the low investment cost per kW […]. Looks like it may be ‘gas forever’ for at least the next couple of decades, so we need to lobby very hard for CCS from the start on every new gas powerplant and large industrial plant, followed by a big programme of properly-subsidised CCS retrofits, if that’s where the real industrial world is going…the quoted US conventional gas number is just plain wrong (far too high!), and the Shale gas price is very geology/location and project-scale-dependent (that is, variable), so that price in Texas does not mean similarly low shale gas prices everywhere – meaning the total resource quoted is certainly not available at that sort of low price. As with all resources, there’s actually a ‘staircase’ of amount versus price. Shale gas exploitation is ‘inherently costly’ (capital-intensive) due to the relatively larger number of wells needed, the poor permeability and the considerable cost of the ‘fracking’ operation itself. The poor inherent permeability inevitably means that the production rate will decline more steeply and quickly than conventional gas wells, meaning that costly multiple repeat fracking may be necessary, adding to costs.”

And as a summary of the shale gas downsides :-

1. Huge levels of uncertainly on total reserves and future production rates, even in the USA.

2. Not at all certain that the large-scale US shale gas experience can be replicated in Europe/Rest of the World at all – environmental issues/local NIMBY [Not In My Back Yard] may stop it in its tracks.

4. Particular over-supply problems in the LNG [Liquid Natural Gas – mostly from the Middle East] sector which should keep the cost of UK imported LNG low for a considerable time.

5.The EU has shown itself unable/unwilling to invest state funds in new gas production/transport projects of all types.”

Forget about price just for a moment…remind me again…where does all that fracking water, with all those toxic chemicals in it, end up ?