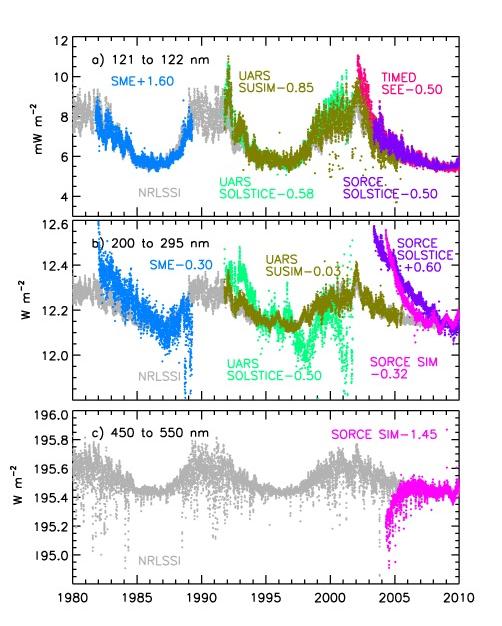 Is something ailing The Register’s Lewis Page ? Despite having access to the text of a recent research paper about the Sun’s recent output, and its short-term impact on surface temperatures on Earth, and having had plenty of time to read plain English reviews of the paper’s findings in everyday language, he still writes it up poorly (in my humble opinion). Could this be due to internal bias, I ask myself ? Or is Lewis Page being wilfully contrarian ? Who can say ?

END_OF_DOCUMENT_TOKEN_TO_BE_REPLACED

The Royal Society today publishes its latest layman’s summary of Climate Change, and thankfully manages to avoid several representational pitfalls that sceptic-deniers could have leapt on and said “See ! We told you !”

Unfortunately, to my mind, it still has a few chinks in the door that should have slammed shut and permanently sealed off the sceptic-denier “contributions” on the subject.

Let’s look at the Royal Society narrative of progress by degrees, for example.

In section 28, “Aspects of climate change on which there is wide agreement : Climate forcing by greenhouse gas changes”, it reads :-

“…Application of established physical principles shows that, even in the absence of processes that amplify or reduce climate change […], the climate sensitivity would be around 1 degree C, for a doubling of CO2 [Carbon Dioxide] concentrations [in the atmosphere]…”

The related material in section 36, “Aspects of climate change where there is a wide consensus but continuing debate and discussion : Climate sensitivity”, goes on to talk about how global warming causes changes in the hydrological cycle, and how water vapour builds up in the atmosphere because of global warming, leading to further global warming :-

“…The more complex climate models, supported by observations, allow climate sensitivity to be calculated in the presence of processes that amplify or reduce the size of the climate response. Increases in water vapour alone, in response to warming, are estimated to approximately double the climate sensitivity from its value in the absence of amplifying processes. There nevertheless remain uncertainties in how much water vapour amounts will change, and how these changes will be distributed in the atmosphere, in response to a warming. Climate models indicate that the overall climate sensitivity (for a hypothetical doubling of CO2 in the atmosphere) is likely to lie in the range 2 degrees C to 4.5 degrees C; this range is mainly due to the difficulties in simulating the overall effect of the response of clouds to climate change mentioned earlier…”