I was encouraged to take in the audiovisual presentation of “All Watched Over by Machines of Loving Grace”, wherein Adam Curtis demonstrates what appears to be a lack of understanding regarding failure in the financial markets. Most foundational year ecologists can tell you that systems are self-correcting, that virtual bubbles get popped, that hubris gets torn down, that over-population gets underfed. Rabbits and foxes. Owls and mice. George Monbiot’s “War On Slugs” because of missing hedgehogs and thrushes. It all depends on the natural resources available to feed the participants in the game. The global economy can only accelerate growth so much before it implodes. There are Limits to Growth. Curtis could be said to be expressing his suspicions that the fake “Knowledge Economy”, the Asian “Shock Doctrine” and the Property Crash were an artefact of a secret evil cabal formed from the vaguely impressed followers of Ayn Rand – but the rest of us all know that’s silly. She was a lovely, sensitive, principled woman, although she could have done with a little more kindness in her life to inspire altruism in her worldview.

Adam’s next splurge is going to try to tear down the foundations of environmentalism itself, and I think somebody should take him to one side and challenge him about his stance – apparently trying to annoy the Greens and the social action movement collectively, all in one over-energetic Guardian “grudge” piece :-

He can’t seem to bear the thought that people, as Ayn Rand advised, should act on their own free will, their enlightened libertarian self-interest, and form associations around causes that they believe in. I’ve taken part in enough democracy to know that UK Uncut is the closest thing to pure people power since Climate Camp pulled together. You cannot fight the imposition of social injustice with a massive, slow-moving bureaucratic organism – you need runners and movers and shakers to get out there and nudge like crazy.

People need to take responsibility for their actions, and we have to trust them to have thought long and hard about the ethics of their intentions and intended actions before they take part in public life in any way. Personally, my political action does not include the destruction of private or public property, nor the harming of other people, animals or other lifeforms. My non-violent direct action is as non-violent as it can be. I would certainly recommend this path to anyone, but I know some people find it hard to take this kind of advice on board. Adam Curtis has to be included in the set of people who act through violence, in my view, poking a big stick in the faces of the peace-loving philosophers of Nature.

This is what democracy looks like : a group of individuals – really individually unique individuals – not pigeonholed segments of an market audience – get talking about what’s wrong and fixing on one thing that they can all agree needs to be opposed – or built – then going out and doing something about it. The best organisations have an almost completely flat hierarchical structure, with small cells of between 5 and 13 people, with equal rights and remuneration, cooperatives, taking on their own tasks, and using interconnecting information people to keep the cells working together. This is a model of organisation drawn directly from Nature, and can be seen in everything from the self-teaching human brain with its delegated centres of executive control, to the way that birds fly in formation.

I don’t agree with everything from James Lovelock’s internal picture of the Gaia universe, but I will agree on this – the ways that people work together best are based on models drawn from the carefully studied ecosystems around us, and our own physical make-up. It’s natural, and it’s efficient. Each person has a task that’s unique to them, that is their personal interest and is the focus of their own individual attention. This is how we get democracy done. By behaving like a self-organising, self-correcting ecosystem. And this is how both Social Change and Climate Change can be addressed – by small, local groups doing action, education, training and political engagement at the grass roots level, or rather, the tree roots level, above which we can grow a strong new trunk to hold our New Low Carbon Nation together. Al Gore spoke of his gameplan as a series of one-to-one conversations. This is a model of political and social influence we can all follow. 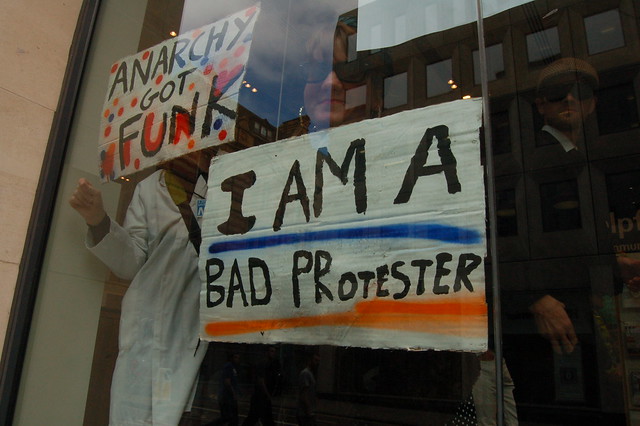 One reply on “Adam Curtis : Against Nature”

When you say he’s against nature, that makes me like him more. I’ve seen trees, animals, and various organisms and the relationships that form between them, but to paraphrase Han Solo, I’ve never seen anything to make me believe there’s some all-pervasive nature encompassing everything. It’s our faith in this myth that disables us from functioning in ecologically healthy ways, and I hope that soon many people will, like Curtis and most serious ecologists, leave it behind for the sake of a much more interesting and fulfilling way of life: realizing that form itself is where the real content is, not some metaphysical fantasy of a balance or essence that binds everything together.