Outside the usual political and media circles, questions are being asked. Why has the United Nations sanctioned military engagement in Libya in the form of UN Security Council Resolution 1973 ? Why the heavy firepower here, in Libya, when the ostensible rationale for intervention was only to implement a No-Fly Zone ? Why not gloibal military action elsewhere in the Middle East North Africa (MENA) arena where there are other despots making life unpleasant or endable for their citizens ?

I present to you two possible futures for Libya, both of which will require extensive cooperation with foreign corporate and political players, something that Muammar Abu Minyar al-Gaddafi (or Qaddafi) threatens, or rather, depending on various news reports, “threatened”.

1. The Dash for African and Arabic Natural Gas (and Oil)

In a carbon-constrained world Natural Gas is a boon – it has roughly half the carbon dioxide emissions of coal when burned to produce steam to generate electricity. Any country that’s got Natural Gas, especially good quality Natural Gas that doesn’t have to be hydraulically “fractured” from rock strata, is a country we will learn to love and trade on significantly generous terms with.

There has been extensive surveying of Libya, and the whole of North Africa’s Maghreb region, including the type of offshore seismic surveying that found extensive gas fields in the Eastern Mediterranean that Israel is now laying claim to (and preventing Gaza from exploiting). This has led to quite a lot of excitement in the fossil fuel energy industry, so, reading between the lines of the conference agendas, there is high dollar value under Libya’s maritime territory :-

In addition to Natural Gas there may well be high levels of top quality oil – and keeping up the flow of crude oil, as we all know, is crucial to the health of the world’s economy. Threats of re-nationalising the Libyan fossil fuel resources therefore caused corporate shock :-

“Oil companies fear nationalisation in Libya : By Sylvia Pfeifer and Javier Blas in London : Published: March 20 2011 : Western oil companies operating in Libya have privately warned that their operations in the country may be nationalised if Colonel Muammer Gaddafi’s regime prevails. Executives, speaking on condition of anonymity because of the rapidly moving situation, believe their companies could be targeted, especially if their home countries are taking part in air strikes against Mr Gaddafi. Allied forces from France, the UK and the US on Saturday unleashed a series of strikes against military targets in Libya. “It is certainly a concern. There are good reserves there,” said one executive at a western oil company with operations in Libya. “We have lost some of our production [because all operations have stopped] but our bigger concern is what will happen to the exploratory work as that gives you a future rather than the immediate impact,” he added. Most of the world’s large international oil companies have producing assets in Libya, including Spain’s Repsol, France’s Total, and Italy’s Eni, which is the largest single investor there. Germany’s Winstershall – a unit of BASF – and OMV of Austria are also present. The country is the world’s 12th largest oil exporter, and the escalating violence there has triggered a jump in prices to nearly $120 a barrel. More than half of Libya’s oil was exported to Italy, Germany and France last year…”

BP had to evacuate its staff, and extend a favour to some British citizens, during the recent uprising :-
https://www.telegraph.co.uk/news/worldnews/africaandindianocean/libya/8344391/Libya-Britain-borrows-BP-jet-to-evacuate-citizens.html

Production in the country has taken a hit due to the fighting, but order should soon be restored. Clearly, long-term stability in Libya, with unhindered, inexpensive access to the country’s oil and gas resources is an important part of the national security interests of many Western democracies. 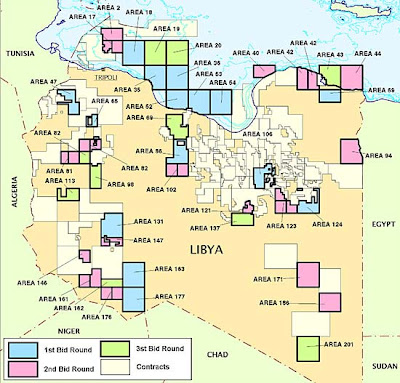 The DESERTEC project of the European Union seeks to roll out solar power in the desert sands of North Africa, and makes the promise of economic and social development of the countries that take part, although that dream has been questioned :-

Let’s face the facts here – massive new energy projects in North Africa will be financed and developed through large multinational, transnational corporations, companies who have contributed to the economic slavery of Africa for, let’s approximate here, centuries.

What guarantees can the Maghreb have that this is not a further land grab on Africa’s potential ?

In addition, the recent social and political volatility in the Middle East North Africa region could jeopardise the noble plans of the European Union to reach out in energy partnership.

Hang on. Wait a minute. Is the wave of uprisings across the Middle East and North Africa connected in any way to the interests of oil and gas companies who want Future #1 to prevail for the whole region, not just Libya ?

American companies have been so keen to sell nuclear electricity projects to Saudi Arabia and others around the Arabian Gulf – but has this been encouraged from the high-ups to keep the Arabs off the scent of Renewable Energy ? Forget nuclear power – it’s expensive and awkward. Iran only pursues civilian nuclear power to irritate the United States Government. A solar Arabia could give the Middle East and North Africa a second generation of being the energy princes of the world. I suspect they will go for this in a big way very shortly, uprisings or no uprisings. Why ? Two little words – Fukushima Daiichi.

So there we have it – two entirely probable, slightly competing, futures being mapped out for Libya by the big guns of NATO (a euphemism for the USA). If Libya is split into two countries, the fossil fuel Future #1 will be likely applied to East Libya, and the desert solar Future #2 will be foisted on West Libya.

Continued interference in the country is a certainty.

One reply on “Libya Futures”

The difference between Saudi Arabia and Japan, and thus the reason why events at Fukushima Dachi are insignificant to Nuclear Energy planners in Riyadh is that Saudi Arabia does not lie on a convergent margin and is not subject to tsunami. In other words the only reason a 40 year old reactor (originally due to be decommissioned this year) failed in the first place isn’t going to happen in Saudi.

Check the HSE performance of Nuclear versus other forms of power generation; the most dangerous is hydro-electricity (the sort of power generation Eco-mentalists all hated 20 years ago), given what happens down stream when the brown sticky stuff hits the fan, and wind power is also uneviable if you’re one of the beneficiaries of the ‘green jobs revolution’ fairytale.

As far as Libya is concerned it remains a small fish in a big pond. interference in Angola, Canada or Russia would be more likely if your assumptions were applied. you would have a point if you were crying about Iraq, but that’s not exactly topical any longer.