Image Credit : Google Maps. Point A shows the location of the Natural Gas discovery announced 5th July 2010. Point B shows the point at which the yacht “The Kingdom of Bahrain” was seized by Iranian Authorities in late November 2009

The United Nations Security Council imposed a new bag of sanctions against Iran in June, and since then various Iranian aircraft have been refused refuelling by that paragon of commercial virtue BP, amongst other things :-

I think Iran have decided to become a little more open and transparent about their national energy policy following these sanctions, in an attempt to de-escalate the situation, which I suspect they now realise could go horribly wrong.

I think they want to drop the levels of mild intentional provocation they have caused by being so secretive about their plans and projects.

On 5th July 2010, there was news that Iran have made a major discovery of Natural Gas in the subsea off their coast near the Island of Kish :-

“Iran announces gas field discovery in Gulf : by Reuters on Monday, 05 July 2010 : Iran has discovered a natural gas field in the Gulf with reserves of more than 700 billion cubic metres, Oil Minister Massoud Mirkazemi said on Monday. The Forouz field was discovered about 30km southeast of the island of Kish, he said, adding it had the capacity to produce 70 million cubic metres of gas per day. He did not give further details.”

The international sanctions will make it hard for Iran to fully exploit this resource, as some oil and gas production companies will not feel able to take contracts for Iran after the UN decision.

Iran will have been surveying this subsea area for some time now, drawing up seismic maps – much like the work that Israel has commissioned in the Mediterranean, and Saudi Arabia is doing in the Red Sea :-

Perhaps Iran were a little too covert in the subsea surveying. They appear to have attracted an “inspection” in November 2009 – a yacht known as the “The Kingdom of Bahrain”, claiming engine trouble, drifted into just this part of the Persian Gulf – and all the five Britons aboard were arrested, four young, inexperienced men and a much older “radio presenter” from Bahrain :- 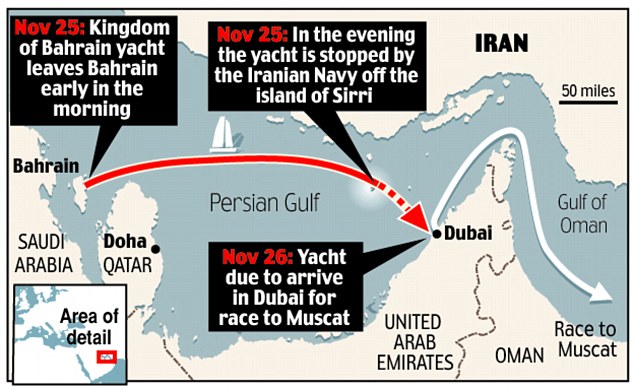 Will this new Natural Gas find and its announcement be part of a new Iranian strategy to avoid irritating the “international community” ?

Will Iran change direction on energy, give up with expensive and dangerous nuclear electricity generation, and “dash for gas” ?