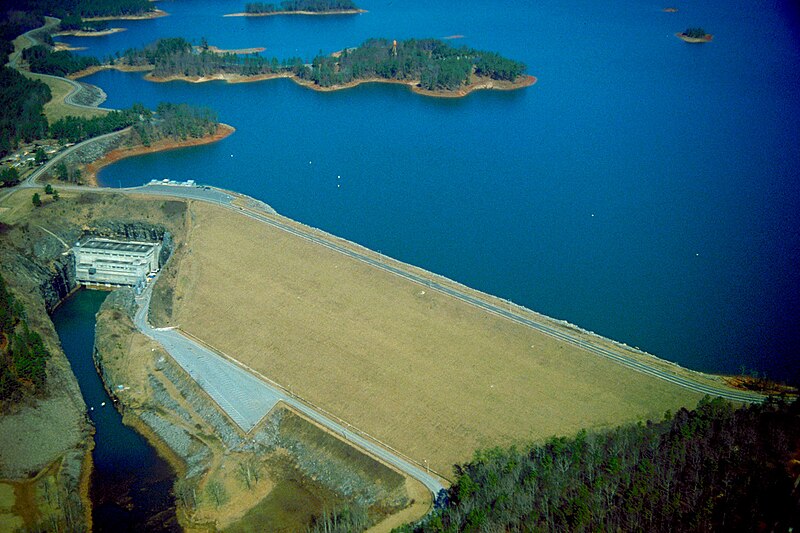 Atlanta, Georgia is running out of fresh drinking water. I heard about it at second hand from one of my relatives who lives there.

Lake Lanier is suffering from drought. Of course there are a number of factors, not just Climate Change. But the combination of cyclical drought, US Army Corps of Engineers activities, increasing urban population and agricultural take doesn’t seem to be able to explain everything.

Of particular concern is the condition known as anoxia, lack of oxygen in the water. This will be partly caused by chemical run-off from surrounding farming land and any industrial activity, and also changes in composition of the tributary rivers which feed it, which will all be exacerbated by changes in rainfall caused by Climate Change.

“Water/Wastewater : Monday 10 August 2009 : Water quality problems hit Atlanta : Poor water quality in Atlanta’s reservoirs is prompting some communities to purchase treatment chemicals to make their water drinkable. Scientists believe that the water levels of lakes Lanier and Allatoona, the main sources of water for the city, have dropped to the “dead zone” – a layer low in oxygen and high in organic material, according to the Sun Journal. Georgia’s leading environmental official Carol Couch stated that she remains unconvinced as to the water quality, which at present levels can possess a strong odour, taste and colour, it has been reported. “Is there water there that could be used? Yes, but it’s not exactly high quality,” she told the Sun Journal. Jim Connaughton, chairman of the White House council on environmental quality, said that the national government is helping state governments make plans for treating the water pumped from such lakes…”

“Because water quality degradation is a long-term concern of the communities surrounding the reservoir, Lanier, its watershed, and the future management of associated nutrient and sediment loadings are focal issues of often contentious and acrimonious debate among all the many stakeholders (Beck et al., 2002). Rapid growth within the lake’s watershed and beyond is placing new burdens on the reservoir in the form of increased municipal and industrial wastewater discharges, agricultural waste inputs, and urban stormwater inflows. Threats to lake water quality include both point and nonpoint sources of pollution (Hatcher, 1994, 1998). Point sources within the Lake Lanier watershed include 13 municipal wastewater treatment plants and 33 private and industrial facilities. Nonpoint sources are ubiquitous, including eight landfills, numerous onsite septic disposal systems, land application of dairy and poultry wastes, as well as stormwater runoff from agricultural and rapidly expanding urban sources…”

“Sunday, Aug. 09, 2009 : Georgia in an unenviable position in the tri-state water conflict : Gov. Perdue is about to enter into negotiations with the governors of Florida and Alabama that could shape the future of the state for decades to come. The outcome of this next battle in the almost two decades old water war between Georgia, Alabama and Florida over Atlanta’s use of Lake Lanier as its primary water source is quickly coming to a close. Georgia lost the last scrimmage when U.S. District Court Judge Paul Magnuson ruled that the state didn’t have the right to use water from Lake Lanier to fuel Atlanta’s growth. Magnuson gave Georgia three years to figure out how to supply 3 million residents with water or seek a change from Congress. This is not a new problem. In a 2002 report, Tri-State Water Wars: Impact on Metropolitan Atlanta’s Future Growth, author Jean Wise laid out the issues. “Metro Atlanta is on a collision course with reality and the shock of this collision will have profound political and economic implications for future growth throughout the Southeast. The core problem is that Atlanta’s runaway growth will soon outstrip the available water supply (Corps, 1998). And if Atlanta continues to increase its water consumption until the maximum limits are reached, the effects on downstream users will become catastrophic, both economically and environmentally.” The report went on to warn: “Without multi-state agreements concerning changes in usage patterns, this could bring about intervention by the federal courts that would effectively halt Atlanta’s development until the usage disputes were resolved.” Resolution of the issues seem further away as each day passes. The report attributes the lack of settlement to: “conflicting priorities of the various constituencies who use the resource. Water is used for consumption, waste disposal, crop irrigation, power generation, industry, recreation, wildlife protection and navigation. In the very near future, there simply won’t be enough.” The one thing the states wanted to avoid was intervention by the federal court. Now that the court has spoken — and not in Georgia’s favor — the grim reality of the situation is hitting home. Atlanta is the only large city to get its water from small river systems, the Apalachicola, Chattahoochee, Flint basin and Alabama Coosa Tallapoosa basin. The recent drought, when Lake Lanier water levels plunged and strict water restrictions were put in place, brought home the water issue for many Atlantans…”

“3-year countdown begins for Atlanta’s water future : By GREG BLUESTEIN and BEN EVANS (AP) – Jul 21, 2009 : ATLANTA — Georgia faces the dire prospect of losing metropolitan Atlanta’s main water source if political leaders can’t broker a solution with Alabama and Florida over rights to a major reservoir within three years. Experts say they doubt a recent federal court ruling will shut the taps off, but it does put Georgia in a weak position and could finally push the three states back to the negotiating table after nearly two decades of stalemate. After all, said Atlanta Regional Commission Chairman Sam Olens, “FEMA isn’t going to provide enough trucks to have drinking water for 4.5 million residents” in the Atlanta region. About 3 million of the residents get their water from Lake Lanier. Georgia could be forced to make significant concessions to Florida and Alabama that it so far has been unwilling to adopt, like spending hundreds of millions of dollars on infrastructure, establishing tighter drought restrictions and offering rebates for more efficient toilets, dishwashers and washing machines. Friday’s ruling by U.S. District Court Judge Paul Magnuson found that nearly all Georgia’s withdrawals from Lake Lanier are illegal because the lake was built for hydroelectric power, not to supply water…”

“Tri-State Water Wars Judge Rules Atlanta Can’t Take Water from Lake Lanier (an SELC press release) : 07.17.2009 – A Statement from the Southern Environmental Law Center : July 17, 2009 : U.S. District Judge Paul Magnuson issued a decision today in the Apalachicola-Chattahoochee-Flint phase of the years-long tri-state water wars between Georgia, Alabama and Florida, saying that metro Atlanta is not authorized to withdraw water from Lake Lanier. The judge gave the three states three years to negotiate a deal and get congressional approval for a compromise that would allow metro Atlanta to continue withdrawing a certain amount of water from the lake; otherwise Buford Dam must start releasing water at 1970s levels. Following is a statement from Gil Rogers: “This is a resounding wake-up call for metro Atlanta. Drought or no drought, this area can no longer take water for granted and should move as quickly as possible to sustainable water management practices that do not involve controversial reservoirs. “It’s also a wake-up call for Alabama, which also needs to establish a sustainable water-use program to prevent something like this from happening there.””

“Updated: 6:04 p.m. May 11, 2009 : Army Corps criticized by Lake Lanier judge : By Bill Rankin : The Atlanta Journal-Constitution : Monday, May 11, 2009 : JACKSONVILLE — A federal judge on Monday criticized the U.S. Army Corps of Engineers for taking decades to determine how to allocate water from Lake Lanier. Senior U.S. District Judge Paul Magnuson said he must now decide the momentous question of whether metro Atlanta is entitled to rely on Lake Lanier as its primary source of its drinking water. “Somewhere, some place, something’s got to come to the attention of people,” Magnuson said at the close of a four-hour hearing, referring to the Corps. “We’re dealing with potential major environmental issues. We’re dealing with potential turn-the-lights-off issues. We’re dealing with potential turn-the-water-off issues.” At the hearing, Georgia staked its claim to water from Lake Lanier, contending water supply for the greater metro area was clearly authorized by legislation enacted by Congress six decades ago. The lake is the source of drinking water for more than 3 million people living in North Georgia and the metro area. The states of Alabama and Florida countered that there are only three primary purposes for Lake Lanier: flood control, hydropower generation and river navigation. Georgia needs congressional approval before it gets the water it says it needs, Parker Thompson, a lawyer for Florida, said. Water supply for the metro area is only an “incidental” benefit, he added. There appears to be no simple solution to the high-stakes case that has cost the parties millions of dollars in attorneys fees since it was first filed 19 years ago. Georgia, Alabama and Florida have tried and failed to settle the issue. Atlanta Mayor Shirley Franklin was among those attending Monday’s hearing. “It’s an important issue for Atlanta, long term,” she said during a break in the proceedings…”

I just wanted to thank you very much for this indepth article. I have already bookmarked your site, when I have more free time I am going to have to do some further reading. Well back to my dreaming of Panama or back to the books – I wonder which one is going to win out. 🙂