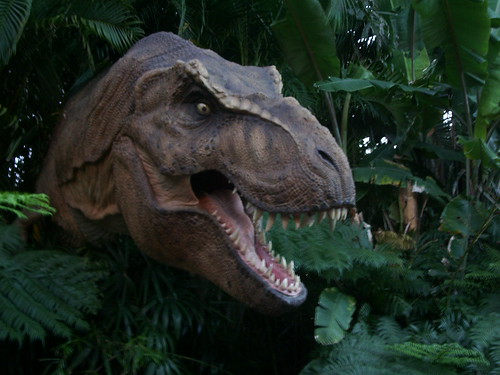 Over the course of aeons of archeaological time, there has been a lot of death, I mean mass extinction, periods of natural hyper-slaughter and climate mayhem, atmospheric toxicity and ocean wipeout.

It’s all in the fossil record, except where those dead things have decomposed or chemically transposed into other things, like petroleum oil.

One of the die-off disasters was roughly 65 million years ago, and wiped out all dinosaur kind. How much dino there is in diesel could be a moot point (or not) :-

“Question : Subject: Carbon content of fossil fuels and dinosaurs : How many tyrannosaurs in a gallon of gasoline? While I suppose that most of the carbon in America’s favorite fossil fuel is botanical in origin, it’s easier to get a gut feel for unrenewability by considering dinosaurs. So to be more specific, if you estimate the number of carbon atoms in one full-grown adult tyrannosaur, what volume of 92 octane gasoline would that represent? And conversely, how many dinosaurs could you build out of the carbon in one gallon of gas?”

“Answer : The answer is that the carbon content of one tyrannosaur is equivalent to that in about 460 gallons of gasoline. (You can build 1/460th of a tyrannosaur using the carbon in 1 gallon of gasoline.) You are probably well aware that gasoline is derived from crude oil by separating it out in a refinery. Crude oil, in turn, is pumped from underground reservoirs which are generally believed to have taken
millions of years to form. As such, oil is considered a “non-renewable” resource in that we are essentially pumping out in a few hundred years what took millions of years to form and concentrate. And, as you note, the current understanding of the formation process is that oil is derived primarily from non-animal sources–probably mostly plankton. The conversion process from a tyrannosaur of 70 million years ago to 92-octane gasoline now would be, shall we say, not impossible but rather indirect…”

“Re: Why do we call it ‘dino’ diesel/fuel/oil? : I think of it as “back in the day of dinosaurs” when the energy was collected from the sun. “DinoDiesel” has a certain poetic quality that is lost calling it “swampy vegetation diesel”.”

“Ancient plants and animals— like dinosaurs— turn into petroleum after being trapped under ground for millions of years. Petroleum is a thick, black, sticky oil, similar to tar. Oilrigs on land and in the ocean pump the petroleum out of the Earth. We have to dig very deep into soil and rocks to reach the petroleum with our pumps…”

Over the last few decades the main argument about Fossil Fuels has been : how much of it is there left ? Various organisations and individuals have attempted to calculate it. Some groups have figures that they keep quite secret. These are the people who think they have a handle on where the remaining Fossil Fuels are located on the planet.

How would you estimate how much Fossil Fuel there is left ?

You could perhaps make an estimation of how much Carbon in the form of Carbon Dioxide and Methane was in the atmosphere after each mass extinction, and compare that to estimates of the tonnage of living creatures at the time before the die-off, making a deduction about how much biological Carbon was deposited under land and sea.

Then you could do the petroleum geology research, and make assumptions about how much of the Carbon-rich bodies of the dead creatures and plants would get put down as sediment in places where Petroleum could later form. Then you would have to deduct the amount of Fossil Fuels that are known to have been burned.

This approach would be chock-full of assumptions and discounting and I don’t think anyone’s tried it (correct me if I’m wrong).

What has been tried is to resurrect the approach of an early petroleum geologist and apply it to current conditions.

The “Hubbert linearization” method, named after M. King Hubbert has been held up as a way of using Fossil Fuel production as an analytical tool to discover the ultimate extent of recoverable reserves.

His work was truly incredible for his time. He had a fondness for clarity, and he used several diagrammatic methods that have been widely replicated : counting squares to check cumulative amounts (integration) and drawing fractions as rectangles of a whole square (the forerunner of pie charts) :-

His coup was to build evidence for a bell-shaped curve of oil production, by showing the straight line of production on a logarithmic scale. He then used this evidence of normalised behaviour of collections of oil wells in fields to predict the peaking of oil production in the United States.

As the Peak Oil engineers don’t cease to tell us, Hubbert was right. And this kudos rubs off on the work of David Rutledge from CalTech. Although he’s a microwave engineer at heart, he has investigated the question of remaining Fossil Fuels using “Hubbert linearization” :-

Trouble is, I’m not entirely convinced.

Oil, Coal and Natural Gas production are as much a reflection of the current economic climate as they are indicative of stuff left to mine and pump.

Also, the high state of industrial development of many trading partners will create a level of dependency on Fossil Fuels that has a significant impact on demand.

We’re not looking at a “free” market in any sense of the word. Any assumption that rates of production are analagous to the maximum extraction possible is fallacious.

Plus, the determination of the “slope” of depletion may not be very accurate when there are breaks in the “market” or political upheaval :-

For all we know, Professor David Rutledge could be more correct than incorrect. If so, the world has far less in terms of remaining Fossil Fuel resources than most people think. That will create problems if if turns out to be true.

However, the most important problem for me is what Professor Rutledge does with the figures he gets. He plugs them into a software program called MAGICC and his conclusion is that Climate Change is no longer a problem if the remaining world Fossil Fuels are as low as he calculates !

I have been in correspondence with him asking about Methane issues, because Carbon Dioxide is not the only Greenhouse Gas. He has been very helpful. Today I have written a further e-mail to him regarding Global Warming. I await his reply.

Sorry to bother you again, but I have a nagging discrepancy to deal with.

I have looked into the conclusions that you present in your “Power-Point Slides (4MB, updated June 2009)”, on Slide #63 in “Hubbert’s Peak, The Coal Question, and Climage Change” :-

I have done a certain amount of following up regarding the “wildly exaggerated” IPCC/WEC/BP reserves-to-exhaust figures, including looking at the trail of guesstimates and back-referencing and mutually status-enhancing citations.

The “total economic extraction amount” of Fossil Fuels has been and will remain a point of extreme disagreement from my point of view, and there’s no doubting that the collapse of the Real Estate/Property bubble has collapsed a large house of (credit) playing cards, making future investment in energy exploitation rather crunchy.

But that’s not why I’m writing. When I compared your ultimate emissions range 762 – 859 GtC (and its ultimate concomitant rise in global temperatures, 0.8 – 1.3 deg C above 1880) and the proposed Carbon budget from the Meinshausen et al Nature Letter of 30 April 2009, I see they say :-

Now I checked the source of their projeections, and found it was the MAGICC software that you also used in your research.

What you’re suggesting is that there is no risk of 1.3 deg C being breached, but Meinshausen et al are suggesting there is a credible risk, even using only +/-~half of the Fossil Fuels that you calculate remain.

This is a clinching fundamental difference, and I am trying to place confidence in one or other positions.

I’m wondering if you have a handle on how your inputs and boundary conditions to the MAGICC program differ from theirs.

Thank you for any and every response…

For another cool dinosaur picture, check this link :-