What if Venezuela is America’s new “frenemy” – the oil-producing trading friend that the United States just loves to hate ? They might not have an appetite or budget for military intervention, but considering the fossil fuel resources locked away under Venezuelan soil and sea, they might just be pleased at a change in the regime – and only one person would need to be removed to make that happen…

Since the economic sanctions were imposed on Venezuela by the USA, for trading with Iran, several very interesting events have transpired, several of them on the same day, 8 June 2011.

First, BP released its 60th annual Statistical Review of energy. Amazingly, overnight, Venezuela appeared to double its stated oil reserves (see charts at the end fo this post). Not really, of course. There were no new discoveries. It’s just that somebody at BP decided that heavy oil, an “unconventional” oil, should be included for Venezuela.

Second, Hugo Chavez took a trip to Cuba from which he has not yet returned, where apparently he has undergone emergency surgery to remove either an infected pelvic abscess, or an abdominal cancerous tumour, or one of a whole collection of other conspiracy theory options.

Although foreign investors were not ousted when Venezuela re-nationalised its oil and gas, they have been letting production slide :-

https://english.eluniversal.com/2011/01/28/en_eco_esp_venezuela-may-review_28A5061653.shtml
“28 January 2011 : Venezuela may review licenses granted to foreign oil companies : The Ministry of Energy asked foreign oil companies to increase output : Venezuela would review the rights granted to foreign oil firms to operate in the South American country in joint ventures with state-run oil company Petróleos de Venezuela (Pdvsa) if they fail to increase output, warned Venezuela’s Minister of Energy and Petroleum Rafael Ramírez. In December, amid a decline in oil production in Venezuela -where more than 90 percent of revenues come from oil exports- the Ministry of Energy and Petroleum asked oil joint ventures to increase oil output, Reuters reported. In December, Venezuela requested oil firms to present a schedule to raise output within a period of 30 working days. “If they fail to comply with their schedules, I would have enough grounds to review the rights that were granted,” Ramírez said. In Venezuela, there are some 20 oil joint ventures -with a combined production capacity of approximately 400,000 bpd. Foreign companies with a stake in oil joint ventures in Venezuela include Brazil’s Petrobras, US Chevron, Spanish Repsol and British BP…”

Ah, BP, the company which has around 40% of its oil and gas business in the USA.

Curiously, just over a year ago, Hugo Chavez had the body of Simon Bolivar exhumed for DNA and other forensic testing to find out if he had been poisoned and/or another buried in his place. It seems he may have been concerned about potential attacks on his own health as well. That raises an interesting question – has Chavez merely been paranoid or is there something in this ? Has some foreign “power” decided that if they want to get their hands on more of the profits from Venezuelan oil and gas, they’re going to have to move beyond the “go slow” tactic, and remove Chavez any way they can ? 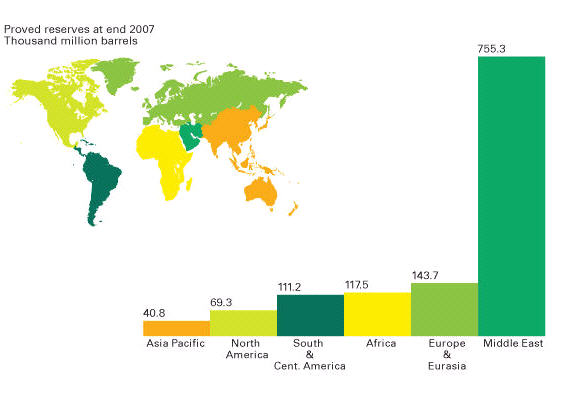 “Global oil reserves rose by 6.6 billion barrels to 1,383 billion barrels in 2010 : In 2010, increases in India, Brazil, Russia, Uganda, Columbia, and Ghana outpaced declines in Mexico and Norway. The 2009 figure was revised higher by 44 billion bbls, due to large upward revisions in Venezuela of 39 billion bbls and smaller increases in Russia, the US, and Libya. At the end of 2010 the global R/P ratio was 46.2 up from 40.3 ten years prior…World proved oil reserves in 2010 were sufficient to meet 46.2 years of global production, down slightly from the 2009 R/P ratio because of a large increase in world production; global proved reserves rose slightly last year. An increase in Venezuelan official reserve estimates drove Latin America’s R/P ratio to 93.9 years – the world’s largest, surpassing the Middle East…Venezuelan reserves are taken from the OPEC Annual Statistical Bulletin, that noted in 2008 that the figure included proven reserves of the Magna Reserve Project in the Orinoco Belt, which amounted to 94,168mb…”

“New Well Raises Gas Reserves in Venezuela : Published: 02/28/2011 : A giant new discovery in the “La Perla” gasfield in the Gulf of Venezuela has raised the country’s reserves of gas to more than 15 trillion cubic feet, corresponding to 2.9 billion barrels of oil equivalent. The “La Perla IV” well was drilled 60 feet deep, and during production tests the well-flow was 17 million cubic feet of gas per day at normal conditions and 500 barrels of condensate per day. According to the website of PDVSA, Venezuela is becoming one of the major gas reservoirs in the world, demonstrating the commitment of Venezuela to stimulate and strengthen the development of the country for the welfare of all Venezuelans…”

“Venezuela oil reserves on way up : Ian James : January 25, 2010 : CARACAS: The Venezuelan Orinoco oil belt holds 513 billion barrels of recoverable heavy crude – nearly twice as much as the proven reserves of Saudi Arabia, the US Geological Survey says in a new estimate. It estimated how much oil could be recovered using existing technologies and said that the area had the largest accumulation it had ever assessed. There was no immediate reaction from the state oil company Petroleos de Venezuela (PDVSA), which has said it hopes to eventually certify more than 235 billion barrels of crude in the Orinoco River basin in eastern Venezuela. A US Geological Survey geologist, Chris Schenk, who led researchers preparing the assessment, said the team based its figures not on estimated reserves that could be certified but on ”what could be recoverable with the technologies that we’re aware of today … we’re saying they’re technically recoverable but not necessarily economically recoverable today,” he said. The team relied in part on data from PDVSA, which has said the Orinoco River basin could hold 1.3 trillion barrels of extra-heavy crude – only some of which is feasible to pump from subterranean sandstone reservoirs. The team came up with a range of ”technically recoverable” oil estimates from 380 billion to 652 billion barrels and determined a mean estimate of 513 billion barrels. ‘Some of the recoveries that they’ve reported from pilot projects are pretty high. And it just shows that with time, technology just gets better,” Mr Schenk said…”

“Sunday, 12 Jun 2011 : RIA Novosti citing Mr Alexander Dyukov CEO of Russia Gazprom Neft, the oil arm of state controlled energy giant Gazprom as saying that the company wants to start oil production at the Junin-6 block in the oil-rich Orinoco River belt in Venezuela in 2013. He said that “We are discussing a possible launch of early production in 2013 with the Venezuelans, adding that Gazprom Neft planned to make exploratory drillings at the deposit in 2011.” ”

UPDATE 1-Venezuela picks firms for 15 tcf gas project-sources : Tue Feb 15, 2011 : By Marianna Parraga : CARACAS, Feb 15 (Reuters) – Venezuela has picked at least four companies from China, Malaysia, Russia and Algeria for a long-delayed offshore natural gas project in the South American OPEC member, sources at the companies said on Tuesday. The continent’s biggest crude oil producer is sitting on some of the world’s largest offshore gas reserves, experts say, but it has yet to begin producing any commercial gas. Venezuelan state oil company PDVSA has spent more than a decade searching for partners to develop its Mariscal Sucre project, which is estimated to hold 14.7 trillion cubic feet. The sources said the companies involved were China’s CNOOC Ltd (0883.HK), Petronas of Malaysia, Sonatrach of Algeria and a Russian consortium. The members of the Russian consortium are Rosneft (ROSN.MM), Surgutneftegaz (SNGS.MM), TNK-BP (TNBP.MM), Lukoil (LKOH.MM) and Gazprom (GAZP.MM), the sources told Reuters. Venezuela was hit by a severe drought last year that slashed production at its hydroelectric dams and led to a renewed focus on boosting gas- and diesel-fueled generation…”