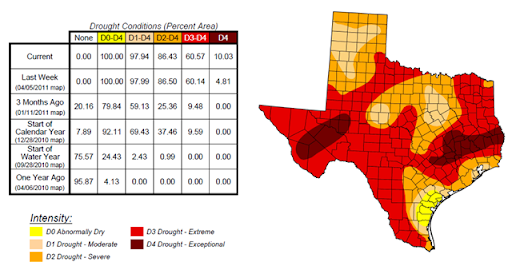 Texas ? My advice is – don’t go there. Not only does it have numerous social problems, it’s also in the midst of a hellfire makeover, caused by extensive drought :-

“Fires rage through much of Texas; more than 1 million acres burned : April 20, 2011 : Several massive wildfires in North and West Texas continued to rage Tuesday, racing through parched fields and woods and adding to a sweeping acreage toll that has reached almost 1.2 million in less than two weeks. A wildfire spanning four counties west of Fort Worth near Possum Kingdom Lake has consumed nearly 150,000 acres, destroyed 150 homes and a church, and forced hundreds to flee since it began Friday, Texas Forest Service spokesman Marq Webb said. The fire, which nearly doubled in size in a day, is one of more than 20 active fires that the Forest Service is fighting statewide in an April that has been plagued by a fierce drought, high temperatures and gusting winds – conditions that have allowed wildfires to ignite and spread quickly in several parts of the state, including Austin…”

The situation is so bad, that the God Squad has been moved to participate, some in practical ways and some in the spiritual department. People are dying, but meanwhile, some in the Heavenward crowd are in denial about Climate Change. Seems that some tombstone-headed American Christians would rather crucify their country than admit that Global Warming Science is right.

State policy on fighting fire seems rather contrary to the trends – and that’s probably because “big government” social budgets needs to be cleansed of too much “red tape”.

Will Texas become uninhabitable, with terrain where nothing can grow; the domain of wind farms, solar fields and duststorms ?

It may be Easter, but it’s not a Good Friday. Happy Scorched Earth Day 2011 !