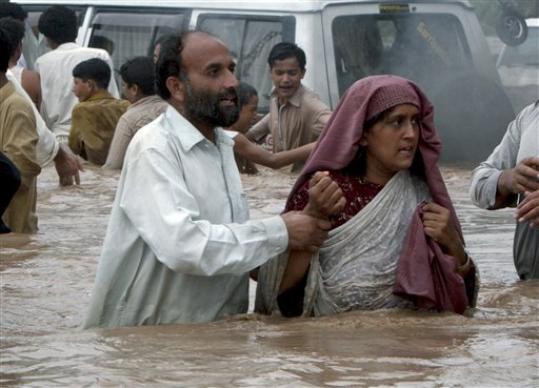 Compassion fatigue appears to have set in early in the Western Media – yet the existential problems of simple human survival, health, shelter, food and clean drinking water have only just started in large parts of Pakistan.

I was speaking with a contact recently who is just about to go out East to help coordinate an emergency mission in the region, and my first question was, “Are you ready for Pakistan ?”, because I don’t think anybody “parachuting” into the country will be.

Plus, this may be the worst crisis that the world’s humanitarian network has faced in the last half Century, but it’s not the only one ongoing and just about to start :-

Human interest stories have been the bread and butter of holiday media for decades – now is the time to roll cameras for the never-ending rollercoaster of disaster Climate Change is turning out to be.

It’s been raining really, really heavily, catastrophically somewhere on the planet practically non-stop since the beginning of the year.

Surely that’s not just a story, that’s a whole narrative ?

And it’s about weather, too, every journalist’s favourite subject.

Something in me tells me that most Media workers are not ready for the complete, overriding disaster the Pakistan floods are becoming. For some reason they are not able to see the damage, project slightly forward into the future and see the scope for shaping news out of it.

Where’s the newshound nose ? Where’s the paternalistic overview used as intervention ? Are the Media shy of building the story because they could be accused of advertising the fundraising that the Disasters Emergency Committee are doing ?

Only a few news organisations have touched on the military security angle of the Pakistan flooding disaster – and when they do they only go so far as to point the finger at the Taliban recruitment drives (which are ongoing, as anyone in the area could tell you).

Very few of the news organisations appear to have talked to the international health, food and water agencies about the inundation in Pakistan and what this implies, not just for the health of Pakistanis, but everybody else in the region.