1. You are looking at the combined effects from several causative sources. Unless you have the means to distinguish the various factors, you cannot apply statistical techniques to the data and expect to get anything truly meaningful out. All that can be said, at best, is, “The Globe. Still Warming.”, as the warming trend over a long enough period of time has managed to stand out over the short-term variations.

2. Looking at the data purely by eye, some of the warming or cooling effects are clearly short-term, others longer-term; so picking a range of years/months/seasons at random, or according to some bias, is likely to distort the analysis. This is known as “cherry-picking”. The results of cherry-picking include the fallacious and discredited claim that, “Global Warming stopped in 1998”, or the much more crafty and misleading, “There has been no statistically significant Global Warming since 1998”.

Some researchers are content just to point to the overall effect of the raw data – global temperatures on land and at sea are rising sharply and the charts should be sufficient to understand the basic problem.

However, some people still contest that Global Warming is taking place, or that if it is, it isn’t serious. This then, is the cue to do an in-depth analysis into the known factors in global temperatures, and to attempt to “deduct” obvious short-term warming and cooling features in order to eyeball the underlying trends :-

There are several key points to make about the “smoothed” Residual Data graph :-

a. This is your model.

All future models of Climate Change should be based on the evidence of this smoothed out Global Warming trendline.

b. Projections are still not predictions.

Although the mid- to long-term Global Warming trend should be obvious from this work – sharply upwards, it is not possible to say with ultimate certainty how internal variability will impact the Mean Surface Global Temperature in the near, short-term future.

For example, although there has been much work on predicting volcanic acticity, it may not be possible to predict the scale of major volcanic activity with high levels of confidence, or with significant lead-time.

The tropical area of the Pacific Ocean is strongly affected by the ENSO, the El Nino Southern Oscillation, where there is a large-scale oscillation (switching) of the wind-water circulation patterns between the states known as El Nino and La Nina. This has a very large impact on not only local air and upper ocean temperatures, but has effects the world over.

It is possible that ENSO has been permanently altered by Global Warming. For example, there is some indication that the frequency of El Nino phases is rising.

For this reason, it would be best to rely to keep the ENSO effect out of the general models of the short- to mid-term projections, but add it in when the climatologists and meteorologists are sure of the next change of phase and its direction.

As for the making and breaking up of standing patterns of air pressure in the North Pole region that have a strong influence on winter temperatures in much of the Northern Hemisphere – well – much has been learned about the Arctic Oscillation in recent years, and it, too is changing, so it would be best to factor these impacts out of models of the past and models of the future too.

c. The fabled “Mid-Century Cooling” of the 20th Century is clearly an artefact of some process other than Global Dimming from industrial aersols, because actually, the globe is warming up, quite clearly.

Some people have attempted to ascribe the 1940s spike in global temperatures to changes in industrial activity and aviation owing to World War II. However, although events of World War II turn out to be the culprit, the cause of the apparent cooling was not increased aerosol distribution in the upper atmosphere :-

Meanwhile in False Colour Scepticovision over in Denial-Land they’re still looking at the raw dataset, cherrypicking a period of dates that suits their purposes, applying the wrong comparision methods between models and the observations, and claiming that Global Warming isn’t significant, all based on the faulty application of Statistics :-

James Annan is in the throes of utter frustration over this particular opus from the McKitrick-McIntyre stable (of unicorns, perhaps ?), ignoring as it does the obvious problem that you can’t just take an average position from model projections and expect to have it match reality :- 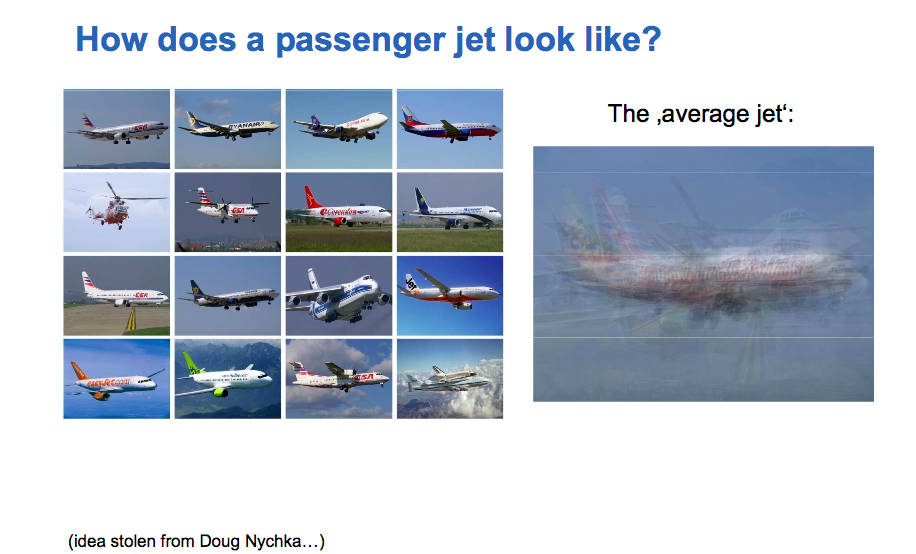 Global Warming denial is not a valid position to take.

Denial of the serious impacts of Climate Change is also not a valid position to take.

Messing about with statistics and making spurious claims does not detract from the ongoing all-too-factual evidence.

The Climate Change sceptic-deniers make a lot of fuss over criticising the Science and the Scientists, and this has created a smokescreen to hide the threat of dangerous Climate Change from the general public.

It is time to ignore their “fake intellectual superiority, timewasting tactics and verbal incontinence”.

Yes, you can call me Post Post Normal. I am so over the idea of dialogue with people who insist on representation without accreditation, who recycle errors religiously, who accuse real Scientists perniciously, and who scorn the process of coming to a true understanding.

It is really time to start to focus on “robust findings” emerging from the Science and start spelling out the real risks and the real data :-