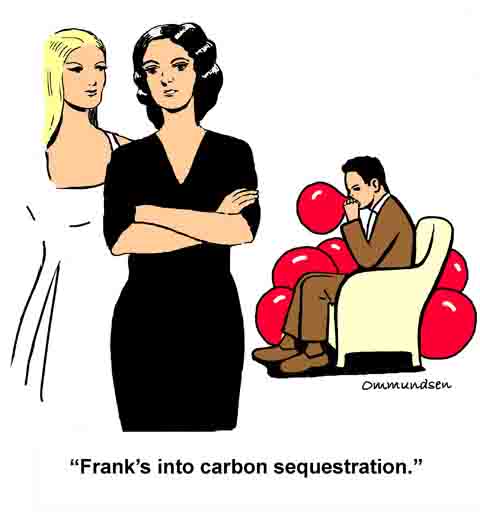 Proponents of the proposed Great Engineering Feat of Carbon Capture and Storage, portray their heroic efforts to suck Carbon Dioxide out of industrial processes, and even out of the sky itself, as the last chance to save us from ourselves and our untidy emissions.

Thing is, even if all the extra Carbon Dioxide in the Atmosphere from the last 150 years of human Fossil Fuel burning activities could be swallowed down into rocks, filters, artificial trees, real trees and caves, all at once, when we have invented and fully developed the Geoengineering Technology for it, we would still have a globally warmed world, and still plenty of excess Carbon Dioxide in the Oceans and Land, which can still make its way out into the Atmosphere…

The enduring challenge is that we must curtail and rein in Carbon Dioxide emissions, as soon as possible, starting now. We cannot carry on burning and wait for Carbon-sucking technological marvels, that may never materialise, as Ken Caldeira and his research colleague Long Cao demonstrate :-

“…4. Discussion and conclusions : Direct removal of large amounts of anthropogenic CO2 [Carbon Dioxide] from the atmosphere could bring atmospheric temperature to lower levels in a short period, but the removal deployment needs to be continued to maintain atmospheric CO2 and temperature [anomaly] at low levels. To maintain atmospheric CO2 concentrations at pre-industrial levels for centuries, ultimately an amount of CO2 approaching the total cumulative amount of anthropogenic CO2 emissions would need to be removed from the atmosphere.”

“Here we simulated idealized and extreme scenarios of atmospheric CO2 removal to illustrate feedbacks and responses of the coupled climate–carbon cycle system to reduced burden of atmospheric CO2. We have made no attempt to consider the technological and economical feasibility of this extreme CO2 removal scenario. There are no known relevant physical limits to CO2 removal from the atmosphere, but industrialized CO2 removal is thought to cost more than the capture and storage of an equivalent amount of carbon from power plants using conventional techniques (IPCC 2005 : “Special Report on Carbon Dioxide Capture and Storage” ed B Metz, O Davidson, H de Coninck, M Loos and L Meyer (Cambridge: Cambridge University Press) 431 pp). We do not present our scenarios as a plausible prediction of the future but rather use them to illustrate fundamental climate and carbon cycle responses that would come into play at any scale of deployment.”

“Our simulations show that in addition to the halt of CO2 emission, a one-time removal of all anthropogenic CO2 from the atmosphere at the middle of this century could reduce surface warming from a peak value of 1.8 degrees C to 1 degree C within a few years, but the 1 degree C warming above the pre-industrial level would persist for a few centuries. This temperature response is a result of both CO2 outgassing from the ocean and land and thermal inertia of the ocean. This characteristic of temperature response, i.e., rapidly fast cooling followed by a much slower cooling, is consistent with a recent study that used an atmosphere–ocean general circulation model to investigate temperature response to an instantaneous return of pre-industrial forcing (Held et al 2010 : Held I, Winton M, Takahashi K, Delworth T L, Zeng F and Vallis G K 2010 “Probing the fast and slow components of global warming by returning abruptly to pre-industrial forcing” J. Clim. 23 2418–27 ). Additional simulations show that if atmospheric CO2 was restored to 350 ppm for one time, a surface warming of 1.2 degrees C would last for several centuries. To maintain atmospheric CO2 and surface temperature at low levels, continued efforts are needed to remove not only anthropogenic CO2 that is in the atmosphere, but anthropogenic CO2 that had been previously taken up by the ocean and land, which would then release to the atmosphere in response to atmospheric CO2 removal.”

2 thoughts on “Suck On This”