1. Carbon Dioxide is not the only Greenhouse Gas

2. Carbon Dioxide “doubling” is not the only possible endpoint

Most of the science around Global Warming is based on a hypothetical case of instantaneous Carbon Dioxide doubling in the Atmosphere, which would take it from pre-industrial levels of somewhere in the region of 274 to 284 parts per million to 548 to 568 parts per million :- Where are we currently ?

The upwards rise is very steep, so the thought experiment of instantaneous doubling of Carbon Dioxide looks like it’s going to become reality.

And what does the Intergovernmental Panel on Climate Change (IPCC) conclude about the thought experiment into doubling of Carbon Dioxide in the Earth’s Atmosphere ?

“The ‘transient climate response’ (TCR, defined as the globally averaged SAT change at the time of CO2 doubling in the 1% per year transient CO2 increase experiment) is better constrained than equilibrium climate sensitivity. The TCR is very likely larger than 1 degree C and very unlikely greater than 3 degrees C based on climate models, in agreement with constraints from the observed surface warming.”

(Note : “equilibrium climate sensitivity” means the final state of the system after hundreds of years).

Note that Roger Harrabin has already strayed from the official scientific “consensus” by rounding down 1.1 degrees Celsius to 1 degree C.

Crucially, he has ignored the fact that the TCR is a model of changes in temperature on the short-term scale. With my trusty spreadsheet programme, I have deduced that the kind of Transient Climate Response experiment we are currently performing with the Earth will have doubled Carbon Dioxide concentrations in the Atmosphere by around about 2050.

What if the levels of Carbon Dioxide in the Atmosphere were to rise after that time ? Projections are that they will, and this will give a higher temperature for the Transient Climate Response.

3. Short-term Global Warming is not the only Greenhouse Effect

Now, many models show that if Carbon Dioxide emissions are controlled back down to “zero net to air” in the near future that the Transient Climate Response will cause the temperatures to level off or even reduce a little.

But it’s highly unlikely that the human world can organise itself to “zero net” Carbon Dioxide emissions to air. The best we can probably hope for is constant emissions. What would the temperature chart look like then ? 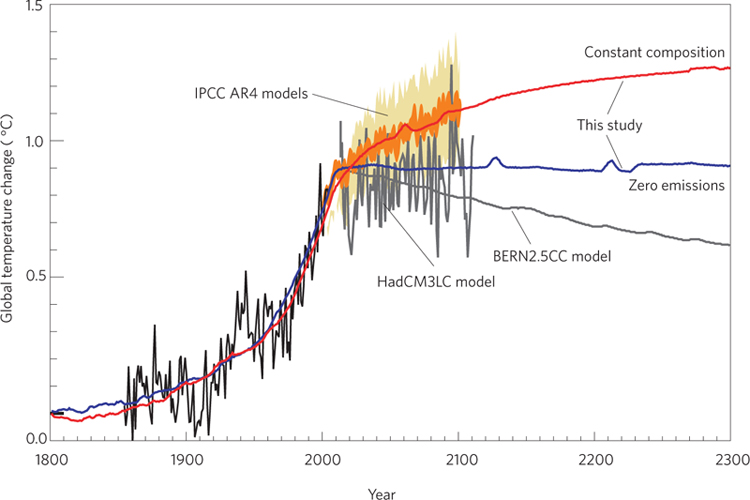 Constant emissions would be the top line. No, that doesn’t look like 1 degree Celsius, either. It looks like a rising value.

Global Warming brings further Global Warming, through a variety of positive feedback effects. These should not be ignored, even if some of them cannot be firmly measured.

Looking back in time in Earth History, there have been periods of Global Warming and Cooling again, from purely natural cycles.

The Equilibrium Climate Sensitivity is the final temperature change, averaged over the Earth, after all the feedback processes have stopped adding extra Global Warming in response to the original Global Warming.

Much research has been done and the answer usually turns out to be in the region of 3 degrees Celsius of Global Warming :-

(Note : tropical ocean temperatures will not be a measure of the global average temperature change. The areas at the poles will have warm ed by a larger amount than the tropics).

It is misleading for Roger Harrabin to talk about Global Warming as if it arrived on its own at the party. There is always Climate Change as a result of Global Warming, and a consequent further warming.

So, in conclusion, I would say that Roger Harrabin is fudging.

The scientific consensus is that the long-term increase in temperature, the “Equilibrium Climate Sensitivity” for a doubling of Carbon Dioxide concentrations in the Atmosphere :-

“The equilibrium climate sensitivity is a measure of the climate system response to sustained radiative forcing. It is not a projection but is defined as the global average surface warming following a doubling of carbon dioxide concentrations. It is likely to be in the range 2 degrees C to 4.5 degrees C with a best estimate of about 3 degrees C, and is very unlikely to be less than 1.5 degrees C. Values substantially higher than 4.5 degrees C cannot be excluded, but agreement of models with observations is not as good for those values.”

“Equilibrium climate sensitivity is found to be most likely around 3.2 degrees C, and very unlikely to be below about 2 degrees C. The upper bound is sensitive to how model parameters are sampled and to the method used to compare with observations.”

In the best case scenario of constant emissions at year 2000 levels, after 100 years, the temperature would increase from where we are now by one degree. But the current temperatures are already 0.6 – 0.8 degrees C above pre-industrial levels. And furthermore, the projections out to 2200 and 2300 show a gradual continual warming under this scenario.

Here is the projection of doubled Carbon Dioxide from year 2000 values, showing the additional temperature rise from 2000 onwards (which would need to be added to the 0.6 – 0.8 degrees C already experienced by the year 2000) :-

The IPCC, remember, is the world’s scientific consensus.

My summary : Roger Harrabin is pulling the wool over his own eyes.

He’s an environmental journalist, not a Climate Change scientist. He shouldn’t allow himself to make such fuzzy, easily misinterpreted claims.

I hope a number of people will complain to the New Scientist.