Not just a rainy weekend :- 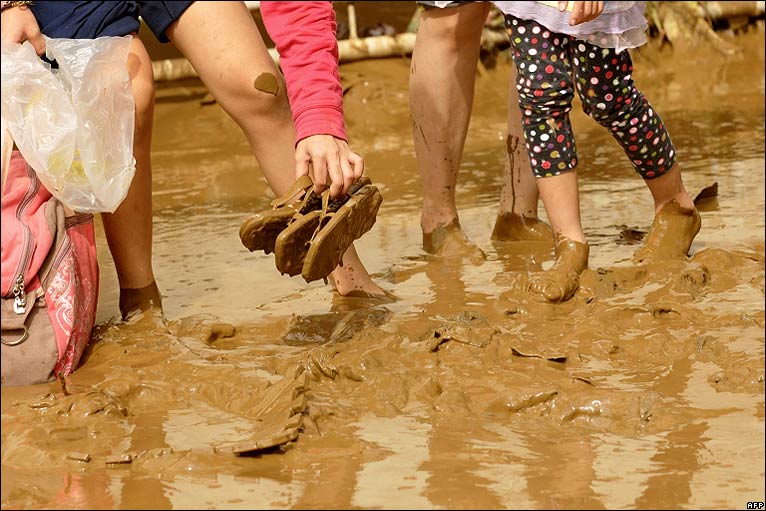 “MANILA, Philippines — Many Filipino villagers managed to save only the clothes on their backs but began to rebuild Sunday as the flood waters receded from a tropical storm that set off the worst flooding in the Philippine capital in 42 years and left about 80 dead.”

“Some residents began to clean up as the flood waters receded. Still, many parts of the capital remained flooded. A brief period of sunshine showed the extent of the devastation in many neighborhoods — destroyed houses, overturned vehicles, and roads covered in debris and mud.”

“Ketsana dumped more than a month’s worth of rain in just 12 hours, causing the government to declare a “state of calamity” in metropolitan Manila and 25 storm-hit provinces. The declaration allowed officials to use emergency funds for relief and rescue.”

“The rains swamped entire towns and set off landslides that have left at least 83 people dead and 23 others missing, Defense Secretary Gilbert Teodoro said. Garbage-choked drains and waterways, along with high tide, compounded the flooding, officials said.”

“Governor Joselito Mendoza of Bulacan province, north of the capital, said it was tragic that “people drowned in their own houses” as the storm raged.”

“Meteorologists say the Philippines’ location in the northwestern Pacific puts it right in the pathway of the world’s No. 1 typhoon generator. Doomed by geography and hobbled by poverty, the Philippines has long tried to minimize the damage caused by the 20 or so typhoons that hit the sprawling archipelago every year. Despite a combination of preparation and mitigation measures, high death tolls and destruction persist.”

“”We’re back to zero,” said Ronald Manlangit, a resident of Marikina city, a suburb of the capital, Manila. Floodwaters engulfed the ground floor of his home and drowned his TV set and other prized belongings. Still, he expressed relief that he managed to move his children to the second floor.”

“Why did the flood rise so high and so fast?…I awoke to bird song Sunday morning, with sunlight peeking through the slats of the Venetian blinds. It was a beautiful morning after a dark night of a deluge that submerged almost the whole of Metro Manila and surrounding provinces. Noah must have felt the same way when the first bird with a twig in its beak landed on the prow of his great ark after the Great Deluge. Outside, the grass was green, the flowers colorful and the trees undamaged. Unlike other storms, “Ondoy” did not have strong winds that toppled trees and electric posts, unroofed houses and made life miserable for everybody. Ondoy, however, made up for it by dumping plenty of rain – so much, that it brought unprecedented high floods in many areas, particularly those near rivers and creeks. So it brought just as much misery as its stronger cousins…Why did the waters rise so high and so fast? many people ask. Because of an unfortunate combination of factors. First of course was the unprecedented amount of rain that caused the rivers to swell and dam reservoirs to fill up. Water had to be released from the dams to prevent the pressure of water from breaking them. This water released from the reservoirs swelled the rivers downstream, causing them to overflow their banks and flood surrounding areas. With the creeks and rivers overflowing with water, there was no place for the rain water to go. So they went to the streets and to the houses and yards of low-lying villages. Some say that it is also because the heavy rains coincided with high tide. Not true…Navotas was relatively better off than inland municipalities. So it was not the high tide. Note that all the areas that were heavily flooded were beside rivers and other waterways. The floodwaters came from upstream and from the dams. The third factor is global warming, the name everybody has heard of but rarely understands. Simply put, global warming is caused by the carbon dioxide that is produced by vehicle exhausts, cooking and other forms of burning, exhausts from factory machines, etc. and which forms a veil, the so-called “greenhouse gases,” around the earth that prevent the sun’s rays from bouncing out. This heat trapped in the earth’s atmosphere heats the planet gradually. The extra heat melts the ice caps that hold a big part of the earth’s water. The melted water raises the level of the world’s oceans. The rising seas submerge low-lying islets and coastal areas. The trapped heat also evaporates water from bodies of water and stores them in the clouds. Cooled, the clouds drop as rain. The rains that dropped on us two days ago could have come from these clouds caused by global warming…”

One reply on “The Trials of The Philippines”