We have changed the Earth. We are changing the Earth. The rate of change is phenomenal. The question is – will this tip the Earth system into an entirely new state, and will this be permanent ?

Treasure every piece of ice, every cap, peak, glacier. We could be leaving the “icehouse world” forever. 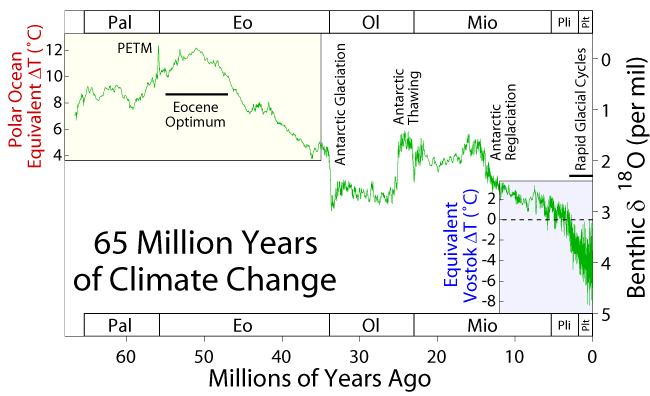 The same data was used in Marcott’s PhD thesis but with the correct dates and no tick! A quick re-write with different dates and “Bingo” – cherry picking gets you a “tick”.

“Marcott, Shakun, Clark and Mix did not use the published dates for ocean cores, instead substituting their own dates. The validity of Marcott-Shakun re-dating will be discussed below, but first, to show that the re-dating “matters” (TM-climate science), here is a graph showing reconstructions using alkenones (31 of 73 proxies) in Marcott style, comparing the results with published dates (red) to results with Marcott-Shakun dates (black). As you see, there is a persistent decline in the alkenone reconstruction in the 20th century using published dates, but a 20th century increase using Marcott-Shakun dates. (It is taking all my will power not to make an obvious comment at this point.)”

McIntyre has also done an incredible job of PROPER scientific analysis and even Mann has been forced to apologise!

This paper is a joke – it is an embarrassment to science.

You may want to read a bit more widely about this paper. Things may not be as bad as you think.

Jo, good news – as I’m sure you will agree – the authors of the Marcott paper have stated that the up-tick in temperatures is not a robust representation of recent global temperatures. Things are most probably not as bad as they first appeared.

I am left wondering why, if global warming is such serious problem, the evidence for its existence is so questionable. Is the Marcott paper really the best that 1000s of scientists and billions of research $ can come up with?

Jo – I notice comments seem to be lost whereas in the past you have always had my admiration for posting even-handedly comments that question the validity of your articles.

So I am disappointed to see that comments are not getting published on this deeply flawed paper.

I would go as far as to say the Marcott paper is a fraud!

Harsh words I know – but to use the same data for his PhD thesis and show NO up-tick and then create the up-tick by manipulating the dates is not science – it is deception pure and simple.

As a fellow Christian – i urge you to be honest with the facts on this paper.

First the economist and now the telegraph (Geoffrey Lean no less!) pointing out that climate sensitivity appears to be low

(Apologies for reposting one of the above links, but my comment has been held in moderation for nearly a week)