There’s something that’s been threatening to keep me awake at night, and it’s not drinking too much coffee. I don’t drink coffee, normally, by the by. No, it’s this : why does Rod Liddle’s photograph on the The Spectator website look remarkably unlike the way he looks in realtime, that is, today ? Here’s what I mean :- 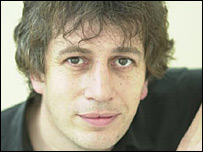 Is this deception ? Vainglorious vanity ? Why does Rod Liddle want to appear so…so… young, when he’s actually rather not young in the slightest ?

And is this sleight of face perhaps symptomatic of his other Media forays ?

Is he alleged to be concealing in any other aspects of truth ?

Is he doing this for purported sensationalist purposes ?

Apparently, the The Internet tells me, there is a distinct chance that the The Independent Newspaper might have his graciousness as their Editor.

This would be a travesty, in my view, and likely bring the The Independent clangingly into the gutter, in my estimation, for a number of reasons, chiefly his Climate Change Deniership :-

But there are other potentially scandalous matters to consider, too :-

“Female pound may sink Liddle’s Indy : Rod Liddle likes to wind people up, but if the Independent ignores women readers then the joke may be on them : Gaby Hinsliff : guardian.co.uk, Monday 11 January 2010 : Short of being publicly handbagged by Harriet Harman, there’s probably little Rod Liddle adores more than this. The sisterhood on the warpath against him editing a liberal newspaper. Organic breakfast muesli spat out, as Islington households absorb the threat. His name in lights, columns reprinted (thrill again to the one about why multiculturalism offers goat curry and crime!). For newsprint’s shock jock, what heaven. So I hate to become another humourless harridan, rising to his bait…”

I honestly don’t fancy the The Independent’s chances of making it through the Ongoing Downturn if this happens.

Maybe Rod Liddle ought to face the full facts.

The Media is slowly exuding Climate Change Deniers, like pus oozing out of an old, rank sore on the posterior. They get their bus passes, as is their social right. They’re told to go home and put on slippers and sip cocoa in the evenings, most likely. His time in the scribbler seat of power will come to an end. And after him will come journalists who have actually studied the Science of Global Warming, and know how to communicate it.

The next big question is this : where do Climate Change Denier Journalists go when they retire ? Speaking, or should I say “invective” tours (of spleen) of the United States of America ? Why don’t all Climate Change Denier Journalists just cut out the actual working for a newspaper bit, and shoot straight off States-side ? They’ll get better money. Just ask Christopher Monckton.

I’m not being ageist. I’m old myself. I’m just asking appropriate questions. It’s time the Media started to recount the truth about Science, in my viewpoint, not just reach for the sensationalist quill.

If you can’t write a sensational story about what’s really happening as a result of Climate Change, you really need to get some education, Mr and Ms Hack.

Crack out of the shell of your little self-vindicating, self-validating world of denial and take a look at the Phenology of Global Climate Change, the evidential Data, the Knowledge of Man-made Global Warming.

And that includes you, James Delingpole. I know you’re reading this, (or one of your acolytes is scanning it). Come out of Babylon ! Exit the lair of the great mystical liar and blood-soaked daemon. Stop uttering rabid incantations to a melting god. Come out of her, deniers ! Come to the safe shore of reason, before your iceberg well and truly dribbles away.