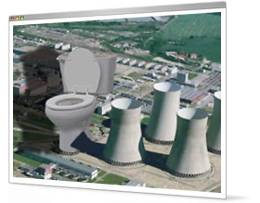 With some fairly minor adaptations to all sewage treatment plants, and a little AD – Anaerobic Digestion – we could hook up our off-gassing into the National Grid, and reduce our Fossil Gas use, big-time.

Watch this technology for meteoric rise. Cheap, cheerful, but slightly pongy. But they do BioGas in China and India all the time, and 2.4 billion Chinidians can’t be wrong.

Something of an irony, the nation’s first commercial Liquid BioMethane bus test will be done at East Midlands airport :-

“Gasrec begins trial of Liquid Biomethane fuel for ground vehicle at East Midlands Airport : Monday, 09 November 2009 – the UK’s first commercial producer of Liquid Biomethane (LBM) – is entering into a six -month trial with East Midlands Airport (EMA), to run a Cobus 3000 passenger bus (which is used to transfer passengers from aircraft to the terminal building), powered by Gasrec’s LBM. LBM is a fuel produced from decomposing organic waste which is suitable for powering a wide range of commercial vehicles. When LBM is used as a vehicle fuel to displace diesel, it can achieve up to 60 per cent reduction in CO2…”

“From The Times : October 16, 2009 : British Gas owner could use cow manure to heat homes : Robin Pagnamenta : British homes could soon be heated by gas produced from cow manure and sewage slurry, under plans being considered by Centrica, the owner of British Gas. The company, which has 16 million UK customers, is drawing up plans to build a plant that would use organic waste to produce biomethane that could be injected directly into the national gas network. National Grid has estimated that such biogas could supply 18 per cent of total UK demand for gas — or 18 billion cubic meters of the approximately 100 billion total consumed in Britain every year. A spokesman for Centrica said that biogas was an “interesting technology” and that it was studying the option of constructing a plant in Britain that would process an array of materials, from abattoir and farm waste to municipal food waste. John Baldwin, a biomethane consultant with CNG Services, which is advising Centrica, said that the industry remained “embryonic” in the UK but was well advanced in continental countries. However, he said that the economics of British biomethane production would be transformed in April 2011, when the Government begins a subsidy scheme called the Renewable Heat Incentive…”

https://www.guardian.co.uk/environment/2009/may/28/lunen-germany-biogas-power
“Poo power to the people”

https://www.yorkshirewater.com/education-and-learning/school-zone/poo-power.aspx
“Using poo as a source of energy”