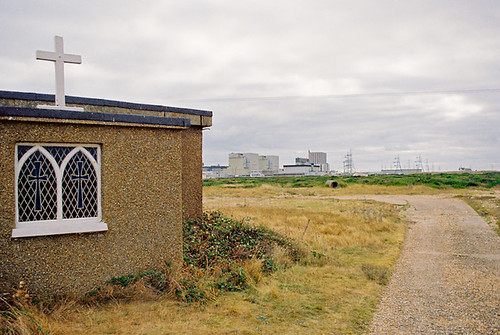 Despite the continuing list of problems with existing Nuclear Power plants, a committed group of highly-financed representatives from mining and construction companies carry on plugging away with the public relations for a new global fleet of Atomic Energy.

The crisp, tinted, glossy promotion packs from the Nuclear industry lobbyists pop up at every conference, meeting and ministerial intray, and certain public persons continue to preach the glow-in-the-dark gospel, glossing over the cracked history of this nightmare Energy industry to date.

The diagrams depicting the “next generation” technologies are always full four-colour, precise, attractive. The propagandists always well-dressed, well-remunerated and clean-shaven.

But experience with the salesmen of yesteryear suggests that the “next generation” technologies may not be as shiny, efficient, safe and easy-to-clean-up-after as the claims promise. Let’s not forget the military stakeholders. And let’s not forget that anything that has involved defence has tended to be a dream castle floating in the air with a very dirty dysfunctional reality.

In summary, the theory of the plan for a new plant is only as good as unforeseen practical problems.

The thing is, we have seen a number of common problems with Nuclear Power. Surely we know enough by now to be cautious about throwing ourselves headlong into a massive new global round of Atomic Generation ?

Let us, for the sake of the record of history, once again enumerate why Nuclear Power is a bad idea :-

1. Capital Locked Up In Construction

During the build phase of all construction projects, large amounts of capital are locked up. With no guarantee that a project will (a) finish or (b) finish on time or (c) finish on budget or (d) generate the power the designers said it would, it is a rather risky venture to start a Nuclear Power project, particularly since all that buying power is held back from more immediately productive uses.

All that locked-up capital is one thing, but there is also the matter of payback – that is – how long will a Nuclear Generation Plant need to operate for before it’s paid back all the Energy and Carbon Emissions used in its construction ? The outline figures make sobering reading. Here’s one admittedly “unofficial” example that puts payback in the 25 to 40 years’ timeframe for the Energy alone :-

Here’s another (see slide 59 out of the 81) – 19 years to payback the Carbon Emissions used to construct the Nuclear plant :-

Nobody’s figured out what to do with all the radioactive waste from the last 50 years of Nuclear Power yet. In the United Kingdom, a large proportion of the Energy budget is held in reserve do deal with this very problem. It’s nearly 100 billion Pounds Sterling so far, and counting.

More to the point, nobody’s figured out how much more expensive atomic electricity would have to be to pay for safe radioactive waste disposal from new Nuclear. You can’t expect the State to pay up for Nuclear waste in future, can you ?

Pro-nuclear advocates are always throwing the France example our way. “75% of French power is nuclear”, they will say, all hoity-toity, neglecting to mention the very considerable State support.

Personally, I’d rather pay taxes towards clean, sustainable power, not new Nuclear (or old Nuclear waste that’s not generating any electricity at all).

The historical facts speak for themselves : everything to do with Nuclear Power deployment always seems to have cost more and taken longer to achieve than planned and budgeted for.

5. A Catalogue of Accidents

Yeah, the risks of a major nuclear accident are small, but there are problems with Nuclear Power reactors and plant all the time. Some of the incidents do not make for steady nerves.

6. Expensive and Time-Consuming to Decommission

When you stop using a Nuclear Reactor, you need to make it safe by taking it out of service and shielding the core, which could remain radioactive for thousands of years.

7. No Recycling of Parts

There are many parts of radioactive waste that simply cannot be re-used in any application, apart from “defence”, that is “attack” uses.

Some kinds of radioactive waste from Nuclear Power reactors can be used for medical purposes, but most of it is injurious to life, either directly as toxic, or into the future as genetic impairment.

All the equipment that is used in a Nuclear Power plant has to be made safe, something that could take a very long time.

Nothing much from a Nuclear Power plant can ever be re-used within a meaningful timeframe.

Can we always rely on the stability of Kazakhstan ?

When a Nuclear Power plant goes offline (stops generating electricity), it is for a variety of reasons, most of them unplanned “outages”.

The step down in power output can be very large, and the time to get the supply back is indeterminate.

Therefore the supply of power from Nuclear generation can be said to be “brittle” – sudden and unexpected, unpredictable outages which cannot be compensated for easily.

There are some countries of the world that have very unreliable Nuclear Power supply behaviour, owing to engineering and maintenance problems.

Plus, because the plant is complex and needs high levels of security, human influences on outages can be high. For example :-

In the future, it may not be possible to count Nuclear Power in the “stable baseload” in any of the larger countries, so unreliable it could turn out to be as plants age rapidly and show performance issues, and new plants don’t get built rapidly.

One reply on “Engineering the Return of Nuclear Power”

A well set-out dismantling and destruction of the current pro-nuclear hype.
I am struck by the fact that the nuclear lobby condemns its critics in a rather personal way, as “hysterical” “emotional”, and “zealous in a religious way over the environment”.

But I find a kind of religious zealotry in the pro-nuclear beliefs:
“A safe way to dispose of radioactive waste will be found, and that will solve the existing waste problem, and the future one”

“A way to prevent nuclear terrorism will be found: we do not need to worry about that”

“Nuclear power is only for ‘peaceful purposes’: we can sell nuclear technology to good ‘safe’ states – (like Saudi Arabia). Present ‘safe’ regimes’ will always remain in safe government”