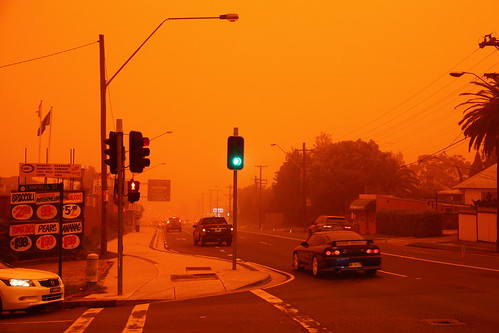 All of a sudden, Sydney, Australia took on the appearance of a filmset for a Martian science fiction drama. The cause : a massive duststorm. The reason ? Massive national drought brought on by Climate Change.

Here’s what Climate Progress had to say :-

“…Australia is the the driest inhabited continent on earth, with a fragile ecosystem, which makes it the canary in the coal mine for how global warming will create Dust Bowls in the SW [United States] and around the globe […] It is, sadly, probably too late to save much of Australia. But it is not too late to save the U.S. Southwest and other key regions in or near the subtropics. We can still prevent the worst. Two years ago, Science […] published research that “predicted a permanent drought by 2050 throughout the Southwest” on our current emissions path – levels of aridity comparable to the 1930s Dust Bowl would stretch from Kansas to California. The Bush Administration itself reaffirmed this conclusion in December […] And a major new study led by NOAA found that if we don’t act to reverse emissions soon, these global Dust Bowls will be irreversible for a long, long time…”

Duststorms around the world : images from The Guardian newspaper :-

“…Huge dust storms like the one which blanketed Sydney and turned the air red across much of eastern Australia this week are spreading epidemics and now reaching every country in the world, but could be absorbing climate change emissions, say scientists studying the little understood global phenomenon…Dust storms are not a new phenomenon…Most dust storms are linked to long droughts, exacerbated by human activities like overgrazing and deforestation…This week meteorologists predicted that many more major dust storms would occur if climate change leads, as expected, to deeper droughts…”

Sandstorms are common in Australia. Don’t use us an an excuse to further your “climate change” rhetoric!

The dust storm which swept across Victoria in February 1983 dumped 1,000 tonnes of farming topsoil on Melbourne, after a duststorm the width of Victoria picked up 50,000 tonnes of soil.

There is no evidence at all that the current drought in eastern Australia is unusual in historical terms.

We’re still trying to decide if it is worse than the Federation Drought of the 1890s.

Jo, you may want to think about the last time this happened in Sydney – way back in the 1940s.