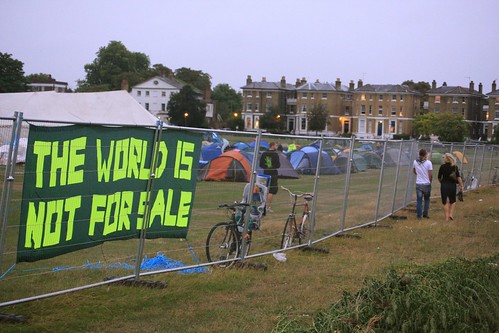 Pipped to the news post by other events of global import, social action on Climate Change got completely wiped off the map today.

The necessary Media footage of violence featuring the Police, intended to diffuse tension built up by the BBC and others over the week, was nicely provided by football hooligans, saving anyone having to trump up some charge about the Climate Campers.

You go to all that work for months and months to win round the public and shame the policing authorities into a corner over their violent tactics against political protest. And then a Dead Kennedy.

Oh dearie, dearie me. Talk about upstaged ! And what similar “life narrative” of the deceased Senator on every single TV channel. How curious.

Anyway, it looks like the Climate Camp is nicely settled in tonight on Blackheath with some great views of the Financial District in Canary Wharf. Hi-di-hi campers ! Put on a brew for me !

What will the camping crowd get up to in the following few days ? And what else will steal their headlines ? We shall see…