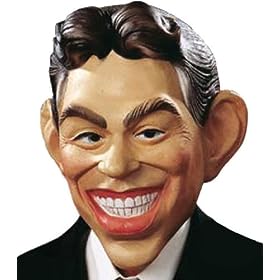 Climate Change is a problem quintessentially expressed in numbers : how many degrees of warming, how many parts per million of Carbon Dioxide in the air, how much Carbon Dioxide the Oceans, Forests, Rocks, Plants and Soils soak up, how many lives will be affected by drought, famine and sickness, how much Methane could be released from tundra and hydrates, how many species will be lost, perhaps including our own.

Science indicates what our targets on Greenhouse Gas Emissions should be, numbers expressed in terms of confidence bands and scenario risks. If we want to prevent the risks we have to follow the numbers. Numbers rule, not whim or wish.

And so I am perturbed to read that Anthony Charles Lynton Blair, formerly Prime Minister of the United Kingdom wants to stop talk of numbers in the Climate Change negotiations.

“Tony Blair: Copenhagen climate summit must not be about ‘percentages’ : World leaders must not get bogged down in ‘precise percentages’ when they negotiate a successor the Kyoto climate change treaty in Copenhagen, Tony Blair has said. By Peter Foster in Beijing : Published: 20 Aug 2009 : Speaking in Beijing on Thursday, Mr Blair said leaders should trust in new technologies to put the world on a path to a greener future. The former British prime minister called for a “realistic and practical” deal to be struck at the UN Summit in Copenhagen this December that would unleash the potential of green technology to solve the problem of global warming. “We need to get an agreement that sets the world on a new path of sustainable consumption without getting obsessed with precise percentages,” he said…”

Tony Blair may be working within a reality known as political, where compromise is possible, where deals are cut in order to meet differing demands, but with Climate Change he has an obligation to also live in the light of scientific reality.

In office, Blair’s trust in technology had muddled form : although he supported Renewable Energy, he was nobbled into accepting new Nuclear plans. With his new role at J. P. Morgan Climate Care, he is probably encouraged by stories of fabulous technological progress in poorer areas of the world that could theoretically benefit from Carbon Credits under the Clean Development Mechanism :-

But as chief engineer Scotty once said, or rather said multiple times on the engine deck of the Starship Enterprise : “you cannae break the Laws of Physics”. It’s all very well for India and China (and Mexico, Russia, Japan and Brazil) committing to reduce emissions. Unless the over-developed countries pay special attention to the numbers, we are not going to win the race to halt Global Warming.

Here are the numbers we need to have :-

2 degrees
Keeping the risk of dangerous, unstoppable Climate Change to an acceptably low level by keeping the average global temperature rise since 1880 down to 2 degrees Centigrade or Celsius :-

2015
Global Greenhouse Gas emissions have to peak by 2015 for us to stand a reaonable chance of controlling Global over-Warming : if the peak is any later, then the reduction curve is impossibly steep :-

“Philosophical Transactions of The Royal Society A : Reframing the climate change challenge in light of post-2000 emission trends : BY KEVIN ANDERSON AND ALICE BOWS : Phil. Trans. R. Soc. A
doi:10.1098/rsta.2008.0138”

If Tony Blair would become accountable to these numbers, he would be saying very different things. Currently his words are “reasonable mollifiers” to those like the elements of the American administration who argue for “Carbon Intensity”, but never “Carbon Limits”; and those in Chindia who argue for continued Fossil Fuel development, sustainable or not.

If the Copenhagen Treaty negotiated in December 2009 is vague and woolly, we may have Tony Blair to blame. That’s an awful lot of responsibility to ask someone to shoulder. He has put himself in the thick of it, at the centre of all the shuttle diplomacy and regional-global meetings. He should take time to listen to what the scientists are reporting, and put numbers on his ambition.