News just in of some sloppy UK Government photoshopping leading to a serious lack of public confidence and some mild humour :-

Yes, Big Ben’s Clock Tower appears to be leaning to the right (or from Ed Miliband’s point of view, to the left).

[ UPDATE : See the end of this post for proof positive of image modification ]

The mutated image is replicated in the Department of Energy and Climate Change’s “The Road to Copenhagen” manifesto document with the secondary title “The UK Government’s case for an ambitious international agreement on climate change” :-

Ed Miliband kicks off play with this : “December 2009 is a make-or-break moment for the future of our planet: a global climate change deal, if it can be won in the negotiations in Copenhagen in December this year, will affect all of our lives and the prospects for generations to come. With decisions as important as these, I believe we must open up the debate as much as possible, and every British citizen should be able to find out what their government is arguing for – so here we are setting out the UK’s position for the global climate change negotiations…The UK will be persuaders for a global agreement consistent with the science…This document has been published so that everyone in the UK can see how we will be arguing in the negotiations, and how they can help the debate so their own voices can be heard.”

So, Ed wants us to use our voices in support of the UK Government’s declared position.

What happens if those who engage in the “debate” don’t actually agree with what the UK Government has asserted as its negotiating position ?

For example, how about those who do not believe that an international Carbon Market can (a) deliver timely Carbon Emissions Reductions or (b) do it “cost-effectively” or (c) deliver funds to developing nations as a reward for their clean Energy programmes ?

Ed’s Department utters thus “The UK supports in particular the development of a global carbon market to encourage emissions reductions in a cost effective way, and to provide large flows of finance to developing countries.”

The Banks, the Carbon Traders and the transnational corporations will make lots of money, but it is not clear if developing nations will.

In many countries of the world, sectors of the economy are monopolised by one or a small group of companies, often foreign-owned. If the Clean Development Mechanism (reformed) were to offer Carbon Credits to entire sectors within a country, then it is possible that the entire financial profits from “greening up” would flow out of that country.

The Ed Miliband script-writing team continue in full flood : Effective…Developing and deploying technology is essential to tackle the causes and consequences of climate change – from low carbon sources of energy to building infrastructure that can withstand the effects of climate change. At Copenhagen we will aim to ensure that existing technologies are rolled out more rapidly around the world partly by building the carbon market, and partly through providing additional support and technical assistance to developing countries…”

Building the Carbon Market will be expensive and time-consuming. It may take a good proportion of any funds made available, and the profits will inevitably land up in the pockets of companies and Banks native to the industrialised countries (but “investing” in developing countries).

This manifesto reeks of the continuing global privatisation initiative – making the rich richer, and the poor completely disempowered.

[ UPDATE : And here’s proof that The Clock Tower is straight and not crooked. Note : it must be a different day, as there is a different time on the clock, and he’s wearing a different suit (probably), and a different hair style, but the SAME TIE ! ] 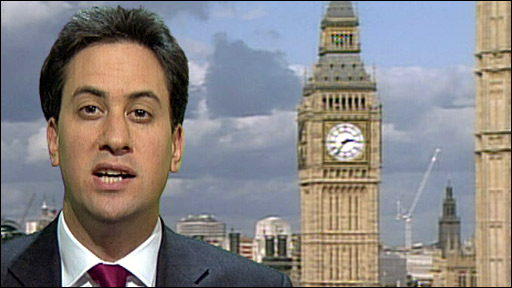