Nicholas Stern, and other more bog standard Economists, all seem to believe in the magical power of Innovation. He writes about it in a reverential way in his book “A Blueprint for a Safer Planet”.

Innovation : gleaming, sparkling, wondrous dexterity : if there’s a buck to be made from shaving a saving, or fishing for an efficiency, it is assumed the holy Market Economy will be in there, innovating away.

Innovation is the mother of Technology, but can also shape it and change it, always able to make the good, better and the better, totally awesome.

Innovation is a central tenet of a number of policy moves on Climate Change. Why, if Carbon Energy is a problem, we’ll just whip up some Non-Carbon Energy in the laboratory at the back of house. You know, like BioFuels (what a sorry story that’s turned out to be).

And if all the sweet crude petroleum oil has been sucked out of the Earth, then Innovation will make it OK : there will be bigger, better, brighter liquid “Alternative” fuels, and they’ll be cleaner, too, because they have to be. Except they won’t.

And here’s why : at the bottom of each oil well is a tar pit, the dregs of the decanted petroleum. As each oil well “peaks” in production, what’s left takes more effort to refine.

And this is the part of the Carbon Energy story you need to understand : it takes Energy to make Energy. You need to explore for resources, and when you’ve found them, you need to mine, pump, pipe and clean them up. And all that labour takes Carbon Energy and other resources.

You need to be well endowed with Carbon Energy in order to extract Carbon Energy from the Earth and distribute it in a useful form to your thirsty customers.

And what is the return rate on Energy like ? What is the Energy Return on Energy Invested (EROEI) ? As it says on Wikipedia’s Energy Portal :-

“For example, when oil was originally discovered, it took on average one barrel of oil to find, extract, and process about 100 barrels of oil. That ratio has declined steadily over the last century to about three barrels gained for one barrel used up in the U.S. (and about ten for one in Saudi Arabia)…”

This issue can be understood easily by looking at the right charts.

Charles A. S. Hall has a very instructive diagram on this very subject on his website :-

He also coins an interesting term “Neohubbertarians” to counter the “Technical cornucopians”. In his slideshow “THE GREAT SCIENTIFIC COVERUP OF THE MOST IMPORTANT ISSUE IN WESTERN CIVILIZATION” from 2005, where he also says :-

“…The market has NOT found a suitable substitute for oil AT ALL…According to Chris Skrebowski, editor of Petroleum Review, a monthly magazine published by the Energy Institute in London, conventional oil reserves are now declining about 4-6% a year worldwide…Really stupid things I think we have done : allowed the economists to get away [with] their theories without testing [their] hypotheses…Franklin Roosevelt greatly increased our debt in time of need but he knew we had the resources to grow again…”

His statistic of declining oil reserves is backed up by the International Energy Agency in their October 2008 truth-telling :-

And then there’s the ingenious charting of Carbon Intensity versus Energy Return here – reading this you must bear in mind that there has been no significant novel form of Energy proposed in 50 years :- 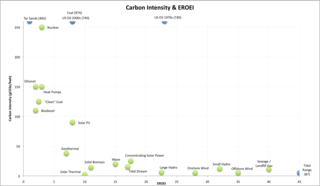 “For any given application, this chart provides a (roughly) optimal ordering of energy sources. Wherever possible, Tidal Range power is the highest EROEI and the lowest (or very very close to the lowest) Carbon Intensity. Next is a choice between Offshore Wind (if you prefer to reduce Carbon Intensity a bit more in exchange for a bit less EROEI) or Sewage / Landfill Gas. And so on…You’ll notice that the included petroleum and petroleum like fuels (US oil, tar sands, Coal) are very dirty, except for possibly “Clean” Coal, which doesn’t really exist yet. And there are alternatives to each of them which have higher EROEIs. But none of them have the physical energy density that these carbon based fuels like oil have…A simple conclusion is obvious: carbon based fuels should not be used for electrical generation (that’s what most of these energy sources are, with the exception of Solar Thermal and the generalized cogeneration of electrical power and heat intrinsic to Sewage / Landfill Gas, Concentrating Solar Power, Solid Biomass, and so on) if any of these other alternatives are available and can supply a significant fraction of the required power.”

So, if Innovation should give us Technology Nirvana, why aren’t the Low Carbon, High EROEI Energies with us, now ?

Massive changes in Energy infrastructure require massive investment – and this has to be done using current Energy resources.

The fact is, we need to avoid the Net Energy Cliff :-

And if we don’t start on building our Renewable Energy infrastructure for our Sustainable Future, we’ll be in a bit of a hole :-

“Jeff Vail has started a series looking at what I’ve long called the “EROEI hole” problem – making sure we don’t leave the transition to renewables too late and find ourselves stuck in a situation where we have shrinking production of fossil fuels which are produced at ever lower EROEI values, thereby making constructing an alternative energy infrastructure a lot more problematic than it would be today – The Renewables Hump: Digging Out of a Hole…”

The non-cricketing Flintoff has yelped about this recently in the Times Online Blogs :-

Really looks like we are peaking early and then we’re in for a rapid shortened slide.

The Oil Age in summary :-
https://www.oilposter.org/

Alternative Fuels aren’t much cop in the analysis of Energy Return detail :-

“Therein EROEI illustrates clearly the challenge we face. As EROEI declines, energy production must accelerate just to maintain the same net energy for society. At an EROEI of less than 2, the amount of energy required to net our current energy usage far exceeds even the most optimistic proposals for our production capacity. Others have concluded much the same: The status quo can’t be maintained if EROEI continues to decline…Many don’t grasp this concept. If they did, they would understand why a falling EROEI is reason for concern.”

Market-based Innovation has not given us the right Energy Technologies to date. Is there any way it will ? Don’t we need to legislate and regulate ? Do we all need to be starving before people start making sense of this ?

“Keeping track of the falling energy profit or surplus of each source is nearly impossible, and the other great unknown is what is a reasonable minimum energy surplus required by humanity to keep us in something like civilization. One metric that we can expect to see rising again as energy profit diminishes is the number and percentage of people growing their own food, either because they want to or because they have to…Being more involved in your vital supply chain, including food production, is a potential silver lining to the cloud of energy depletion, but only if we are ready for it. The energy runes are already telling us that there is a growing global food problem – already leading to starvation for some, and it would be wise if we did not wait for any more catastrophes before getting that message.”

One reply on “Stern Remarks #3 : The Law of Diminishing Energy Returns”