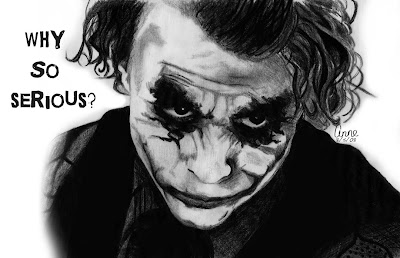 In his own, special, blond, way, I feel Bjørn Lomborg is as dangerous as Martin Durkin. They both act like incarnations of The Climate Joker in my view, showing different capricious sides to the destructive force of mankind’s inhumanity to man (and beast and tree).

Martin Durkin directs documentaries and films apparently claiming the authority to speak about Nature and Climate, without any basis in reality. It seems he tries to usurp the public mind, and it is alleged he has a barely-hidden agenda of destroying confidence in Science (and the United Nations).

He is in my opinion an arch-propagandist without wide-ranging knowledge, and without an accurate comprehension of what he attempts to speak to.

And yet Channel 4 allowed him a huge platform to undermine the public mind by showing his film “The Great Global Warming Swindle”. The film itself was the actual swindle, in my view.

Bjørn Lomborg is a different kind of jester, to my mind. He claims to be an authority in the pseudo-science of Economics, and with his “Copenhagen Consensus” he has struggled to convince politicians not to waste money fighting Climate Change.

He appeared to have an epiphany recently, and started to urge an international Climate Treaty for the United Nations conference this December – but his technological proposals for solving Climate Change were the highly risky, unproven visions of Geoengineering. Hardly a man with his feet on the ground, then.

“Bjørn Lomborg answers your questions on geo-engineering and the cost of avoiding climate change : August 12, 2009 3:04pm : by FT Energy Source : Bjørn Lomborg, the author of ‘The Skeptical Environmentalist’, now believes reaching an agreement at Copenhagen is vital. His Copenhagen Consensus has published a paper calling for geo-engineering measures, such as deflecting sunlight from the face of the earth, to be considered. Lomborg answers readers’ questions below…”

Now he’s come out and said it clearly : he thinks spending money on addressing Climate Change in the ways and to the targets highlighted by Climate Science is too expensive. He asserts that we should aim for lower ambition. He’s really put the big red lipstick smile on this time.

Follow what he says and you’ll have mass human and ecosystem extinction. Not in Copenhagen, Denmark, the capital city of his home country maybe, but elsewhere in the world. So much for his love of his fellow man. The Joker.

“Climate change report urges cut in costs : By Kate Mackenzie in London : Published: August 14 2009 : Avoiding a global temperature increase of more than 2 degrees Celsius, which scientists regard as the safe limit, will be prohibitively expensive, while a far less ambitious target would produce a more costefficient result for the world economy, according to a new study. The report, published today by the Copenhagen Consensus , a group of economists brought together by a Danish academic, Bjorn Lomborg, is at odds with the prevailing view that large sums should be spent over the next decade to ward off climate change. Mr Lomborg, long known as a climate change sceptic, told the Financial Times last week he now believed questions over the science ” have been answered pretty unequivocally ” and that an agreement at the next UN climate change meeting in Copenhagen in December would be crucial. However, he believes the measures being considered are unnecessarily costly. The report, by Richard Tol, an environmental economist, says a less ambitious plan would fare better on a cost-benefit basis than a big, early investment. “Coming up with overambitious targets is not credible,” says Mr Tol. “It signals that it’s just a gimmick to win voters, that it’s not for real.” The cost of stabilising atmospheric carbon dioxide at 450 parts per million – the level thought necessary to avoid the worst effects of climate change – would be 12.9 per cent of global gross domestic product, Mr Tol says. That would require a tax of $68 per tonne of CO 2 worldwide, from 2010. However, that scenario would cost $50 over the course of the century for every dollar saved, Mr Tol argues. By contrast, a much lower worldwide CO 2 tax of 50 cents per tonne would cost only 66 cents for every dollar saved, but under this scenario concentration would stabilise at 850ppm – a level scientists say would have catastrophic effects on climate…”

NOTE : When the BBC screened a series called “Climate Wars”, the Climate Change Denialists said it was “fraud with lipstick”. I’m just returning the detraction :-