Oh, you know, the Arctic Sea Ice is in a “death spiral”, but good old Antarctica is holding firm – ice sheets as strong as ever, colder and more concrete a Polar Ice Cap than ever before.

“Nature Geoscience 3, 468 – 472 (2010) : Published online: 20 June 2010 | doi:10.1038/ngeo890 : Observations beneath Pine Island Glacier in West Antarctica and implications for its retreat : Adrian Jenkins, Pierre Dutrieux, Stanley S. Jacobs, Stephen D. McPhail, James R. Perrett, Andrew T. Webb & David White : Thinning ice in West Antarctica, resulting from acceleration in the flow of outlet glaciers, is at present contributing about 10% of the observed rise in global sea level. Pine Island Glacier in particular has shown nearly continuous acceleration and thinning, throughout the short observational record. The floating ice shelf that forms where the glacier reaches the coast has been thinning rapidly, driven by changes in ocean heat transport beneath it. As a result, the line that separates grounded and floating ice has retreated inland. These events have been postulated as the cause for the inland thinning and acceleration. Here we report evidence gathered by an autonomous underwater vehicle operating beneath the ice shelf that Pine Island Glacier was recently grounded on a transverse ridge in the sea floor. Warm sea water now flows through a widening gap above the submarine ridge, rapidly melting the thick ice of the newly formed upstream half of the ice shelf. The present evolution of Pine Island Glacier is thus part of a longer-term trend that has moved the downstream limit of grounded ice inland by 30  kilometres, into water that is 300  metres deeper than over the ridge crest. The pace and ultimate extent of such potentially unstable retreat are central to the debate over the possibility of widespread ice-sheet collapse triggered by climate change.”

Why does it worry people ?

“Geology; August 2010; v. 38; no. 8; p. 723-726; DOI: 10.1130/G31068.1 : Large-scale glaciation and deglaciation of Antarctica during the Late Eocene : Shanan E. Peters, Anders E. Carlson, Daniel C. Kelly and Philip D. Gingerich [Department of Geoscience, University of Wisconsin, Madison, Wisconsin 53706, USA; Department of Geological Sciences and Museum of Paleontology, University of Michigan, Ann Arbor, Michigan 48109, USA ] : Approximately 34 million years ago, Earth’s climate transitioned from a relatively warm, ice-free world to one characterized by cooler climates and a large, permanent Antarctic Ice Sheet. Understanding this major climate transition is important, but determining its causes has been complicated by uncertainties in the basic patterns of global temperature and ice volume change. Here we use an unusually well exposed coastal incised river-valley complex in the Western Desert of Egypt to show that eustatic sea level fell and then rose by around 40 metres 2 million years prior to establishment of a permanent Antarctic Ice Sheet. This fall in sea level is associated with a positive oxygen isotope excursion that has been interpreted to reflect global cooling, but instead records buildup of an Antarctic Ice Sheet with a volume 70% of the present-day East Antarctic Ice Sheet. Both the sea-level fall and subsequent rise were coincident with a transient oscillation in atmospheric CO2 concentration down to 750 parts per million, which climate models indicate may be a threshold for Southern Hemisphere glaciation. Because many of the carbon emission scenarios for the coming century predict that atmospheric CO2 [Carbon Dioxide] will rise above this same 750 ppm threshold, our results suggest that global climate could transition to a state like the Late Eocene, when a large permanent Antarctic Ice Sheet was not sustainable.”

Even as the Antarctic Sea Ice is building up :- 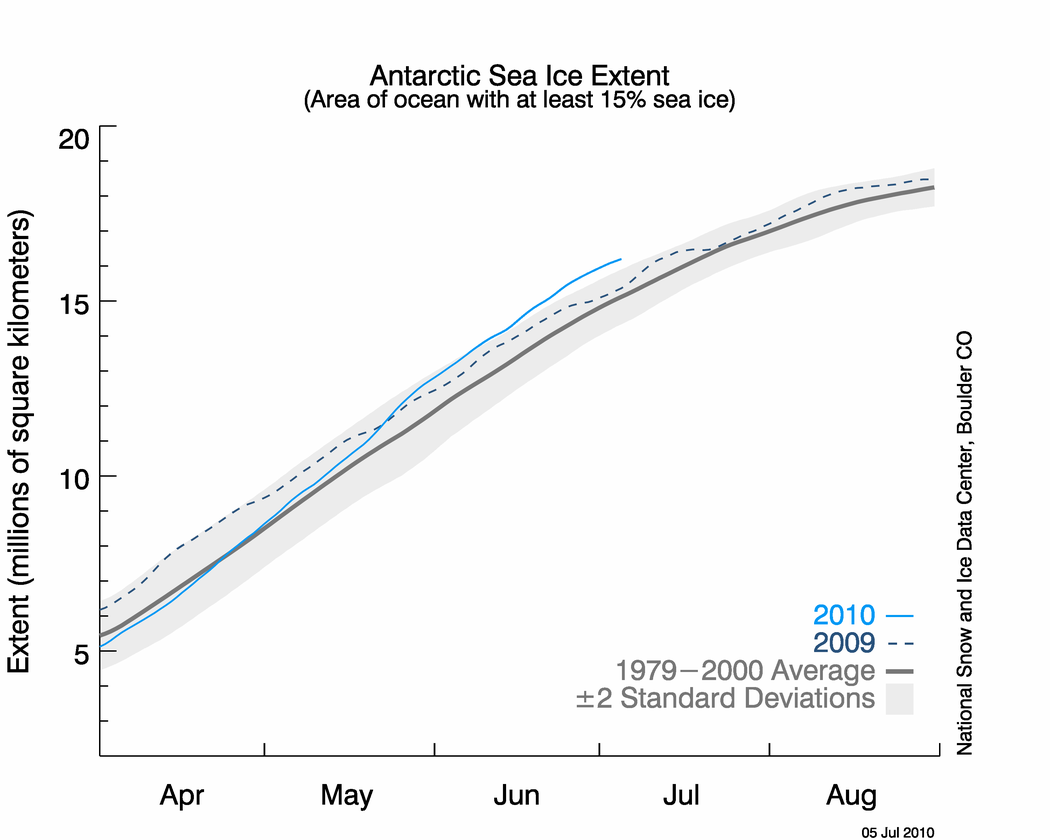